The Great Hunt by Robert Jordan

The Great Hunt is the second volume in Robert Jordan's gigantic, rainforest-devastating Wheel of Time series. It was originally published in late 1990 and like the first volume, The Eye of the World, was an immediate big seller. 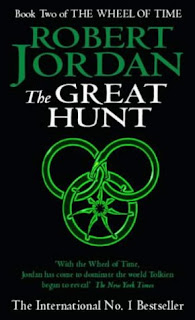 The story picks up a month or so after The Eye of the World. Rand al'Thor has discovered he can channel the One Power and thus is doomed to go insane and die, wreaking terrible destruction at the same time. Normally it would be the responsibility of the Aes Sedai sisterhood to 'gentle' him, remove his ability to channel, but Rand's Aes Sedai mentor, Moiraine, and the head of the sisterhood, Siuan Sanche, believe that he is the Dragon Reborn, the long-prophesied saviour who will defeat the Dark One at the Last Battle. As such, they have no choice but to let him go free. When the twisted, insane Padan Fain steals the legendary Horn of Valere and the cursed dagger from Shadar Logoth upon which the life of Rand's friend Mat depends, a band of hunters are assembled to track Fain down and reclaim the dagger. Meanwhile, Egwene and Nynaeve travel to Tar Valon to begin their training as Aes Sedai, but find danger lurking even within the walls of the White Tower. In the far west, on Toman Head, rumours speak of the arrival of strangers who apparently use the One Power in battle and use savage beasts in combat, strangers who will not rest until all the lands are under their control...again.

The Great Hunt sees a notable widening of the scope of the world seen in the first book. Whilst the first novel perhaps veered too close to Lord of the Rings' characters and structure to be entirely comfortable, the sequel takes off in a completely different direction. Whilst the series' slightly irritating tendency to be obsessed with 'plot coupons' gets its start here, it does give the book a classical quest structure and deals with the parallel timelines as the core group from the first book gets split up and we follow them separately until their reunion at the end. Jordan also introduces a whole new threat in the form of the Seanchan, a powerful empire ruling a continent beyond the western ocean who now want to reclaim the homeland of their founder (Artur Hawkwing's son). This out-of-left-field threat does an excellent job of shaking things up, whilst the suspicious timing (the Seanchan invasion occurs at the same time the forces of the Shadow are gaining strength in the world) is later revealed as deliberate. The characters are deepened and made more interesting, particularly Rand and Perrin who are shown to grow and change as a result of the revelations they have discovered and the things they have suffered in the first novel. However, we also get to see the Dumb Aes Sedai plot trope get the first of many wearying outings, as Nynaeve, Elayne and Egwene get led into a trap which couldn't be any more painfully obvious. Only their relative youth and naivete makes it convincing in this book; the fact that Elayne is still falling for these things as late as Book 11 is rather more dubious. 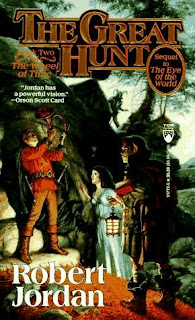 The Great Hunt (****) is a notable improvement on the first book, taking the world, story and characters in refreshing and interesting new directions. Jordan's mastery of his enormous narrative is evident here, and even a certain economy (not a word normally associated with the verbose Jordan) of plotting can be detected as some major storylines are rattled through in just a few pages (the Seanchan themselves, surprisingly, don't appear until the book is more than halfway done). The novel is published by Orbit in the UK and Tor in the USA, and is followed by The Dragon Reborn.
Posted by Adam Whitehead at 21:27

Email ThisBlogThis!Share to TwitterShare to FacebookShare to Pinterest
Labels: robert jordan, the great hunt, the wheel of time

Hey - I guess I don't understand why you are posting reviews for books that are 10 years old? Maybe some people find those interesting and useful, but I'm not one of them

The blog is for the reviewing of everything that takes my interest. Wheel of Time is one of those much-discussed series which, traditionally, people jump on when there's actually a lot of good stuff there, and reviewing the earlier books is a good way of bringing more positive discussion into the debate. However, I'm not going to stop reviewing new stuff or books I haven't read before, and the WoT reviews should be interspersed with newer material.

For example, I reviewed Return of the Crimson Guard between the first two books and hopefully will have a review of World War Z to put up between the third and fourth. I'm also anticipating a review copy of Peter F. Hamilton's latest any day now.

I was kind of indifferent about the Wheel of Time series after the first book, but there was a moment, early in The Great Hunt, where things clicked, and I knew I was in for the long haul. The early books are the best, because each one is better than the last, culminating with book 4, The Shadow Rising, which is one of the greatest fantasy novels ever written. The series levels off a bit from there, with long slow periods occasionally interspersed with scenes so awesome you don't know what to do with yourself, like the climactic battle scene of book 6, Lord of Chaos.

It's a terrible tragedy that Jordan died before he could finish the series. I hope (my fellow JABberwocky author) Brandon Sanderson can do the final volume justice as he finishes the novel from Jordan's partially completed prose and notes.