Misspent Youth is the eighth novel by British SF author Peter F. Hamilton, originally published in 2002. It is a stand-alone novel, but also serves as a prelude to his critically-acclaimed Commonwealth Saga (consisting of Pandora's Star and Judas Unchained). A new edition of the novel has just been released for the US market, although the differences with the UK edition are fairly minimal. 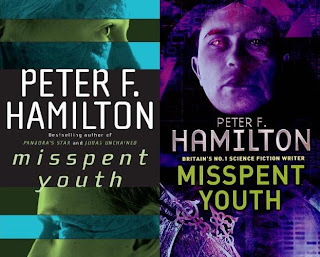 Hamilton is most famous for his epic space operas such as the classic Night's Dawn Trilogy, but it is easy to forget he started his career much smaller in scale, with his trilogy of near-future detective novels starring Greg Mandel. Misspent Youth, although set in a different timeline, recalls those early days by having the story set circa 2040 in Britain, in and around Hamilton's own home town of Rutland. The novel follows what happens to 77-year-old millionaire philanthropist Jeff Baker when he becomes the first human to undergo a complex rejeuvenation technique, which restores him to the physical age of 21, and the consequences of this on his trophy wife, his teenage son Tim and his friends.

Misspent Youth has the reputation of being Hamilton's weakest novel and it certainly is that. Hamilton has many great skills, including off-hand and easily comprehensible descriptions of high technology, great space battles, a furious pace and a knack for writing detective fiction. None of this is much help in this novel. The book is something of a character study and a treatise on the emotional impact of the rejeuvenation technology, but although Hamilton can certainly create cool characters, he is less adept at providing them with onion-like layers of complexity and depth. His biggest mistake in Misspent Youth is making most of the characters inherently selfish and dislikable. Jeff Baker rapidly alienates his old friends by preferring to go clubbing rather than hanging out at the local rehashing decades-old arguments over whether Alien or Aliens is the better film, and he later seduces his son's 17-year-old girlfriend Annabel. Annabel herself is one of the three principal POVs we follow through the story (along with Jeff and Tim) and doesn't come across as particularly likable either, though amusingly her often thoughtlessly-selfish actions do ring true for a teenage character. The only halfway likable character is Tim, whose relationship with his father shifts convincingly back and forth several times in the book.

Whilst this plot unfolds in the foreground, Hamilton remembers to include his trademark superb worldbuilding and it's fascinating to watch the very earliest pieces of the culture of the later Intersolar Commonwealth slot into place. Baker is the inventor of the datasphere, forerunner to the universal data-storage system seen in the Commonwealth novels, and the story of how he invented it and why he gave away all business rights to it is actually the highlight of the novel. The datasphere may allow virtually instantaneous transmission of ideas, video and audio (tens of thousands times faster than broadband) but it has also single-handedly wiped out most of modern culture. No one makes films or releases music commercially any more as the datasphere allows pirate copies to be spread and downloaded in microseconds, beyond the ability of any data-protection system to neutralise, whilst bands and writers only work for personal pleasure. TV is also pretty much dead, save for repeats, news and soap operas. In an interesting scene real-life SF&F author Graham Joyce debates the rights and wrongs of this system with Tim and Hamilton certainly raises a worthy debate with this plot strand.

It's all rather subsumed by the soap-opera like character machinations though. Some may find the rather large number of sex scenes to be unnecessary, and the dislikable characters do make the story somewhat laborious to continue with at points. I'm guessing most won't find the ending that unpredictable either. However, Hamilton raises some good points and for once his technology isn't that too far off from what might actually be possible, and his willingness to address that through a character study rather than his typical massive war-in-space is an interesting move. Also, it's relatively short (400 pages) compared to his usual behemoths.

Overall, not his best work and at times rather dull, but the scene-setting for The Commonwealth Saga makes Misspent Youth (***) worth reading. The novel is published by Pan Macmillan in the UK and by Del Rey in the USA. Hamilton's latest novel, The Temporal Void, is released next month in the UK.
Posted by Adam Whitehead at 22:03