Return of the Crimson Guard by Ian Cameron Esslemont

2008 is proving to be something of a bumper year for fans of the Malazan universe. Steven Erikson's eighth novel in the setting, Toll the Hounds, was published back in June and the first novel in the series, Gardens of the Moon, has seen two reprintings this year. The first was as a new, wallet-friendly budget edition from Bantam designed to entice new readers to the series, whilst Subterranean Press are about to release a new, limited edition beautifully illustrated by the mighty Michael Kormack. And to top it all off, Ian Cameron Esslemont, the co-creator of the Malazan world, has had his second novel published. 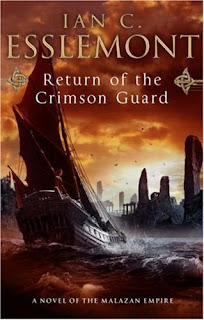 Return of the Crimson Guard starts shortly after the events of Erikson's sixth book, The Bonehunters. The Malazan Empire is in trouble. Whilst the Genabackan campaign has ended in peaceful negotiations with Anomander Rake's Tiste Andii and the remaining free cities, the Seven Cities theatre has turned into a bloodbath. The rebellion known as the Whirlwind has been crushed only at a truly staggering cost, whilst the subcontinent has been devastated by plague. The two most disgraced officers of that campaign, Mallick Rel and Korbolo Dom, have somehow come up smelling of roses and risen to high office within the Empire. They have turned the blame for that campaign on the Wickans, and now Malazan settlers desperate for new land are embarking on a pogrom of the Wickan homelands. Elsewhere, the near-annihilation of the elite imperial assassin-mages, the Claw, in the battle for Malaz City has seen Empress Laseen's position weakened and long-quiescent nationalist movements across Quon Tali, the Empire's heartland, have awoken with a passion. The 'old guard' who believe that Laseen betrayed the first Emperor, Kellenvad, have joined forces with the Talian League on a mission to pull Laseen down.

Whilst the Malazan Empire braces itself for its first major civil war, its enemies prepare to move against it. A century ago, when the Malazans overran the Duchy of Avore, its leader, K'azz D'avore, swore a vow not to rest, not even to die, until the Empire was destroyed. Thus was born the Crimson Guard, the most elite fighting force in the world who have opposed the Malazans on multiple fronts. Now the Guard are regrouping in Stratem with one goal: to strike at the Empire in its moment of weakness and utterly destroy it.

Whilst Erikson's novels have concentrated mostly on the Empire's foreign theatres and events in distant lands, Esslemont has clearly made it his job to examine the Empire itself. Night of Knives was the story of a tumultuous single night in the history of the Empire, whilst Return of the Crimson Guard shows the consequences of some of the events in Erikson's books on the Empire's heartland. Whilst Night of Knives was a bonus or add-on story, Return of the Crimson Guards is a much more important, integral part of the overall Malazan story. Characters only briefly seen or alluded to in Erikson's books are on centre stage here. Major, earth-shattering events take place which will have a major fall-out on future Malazan books. There's even a running gag from Erikson's books (involving a bunch of arrogant Tiste Liosan) which gets revisited here.

Quality-wise, Return is a major improvement over Knives. The events are much bigger, with multiple storylines, each quite complex on its own, building to a huge convergence on the Seti Plains for the conclusion which doesn't disappoint: the biggest battle in the entire series to date, which considering the likes of the Chain of Dogs or the Siege of Capustan in Memories of Ice, is really saying something. The story is told by a large number of POV characters, including a young Crimson Guard recruit, the unwilling figurehead of the Talian League and multiple League and Malazan soldiers and mages. Shockingly, a lot of these characters talk like people actually would talk, rather than engaging in Proust-style discourses on the metaphysical nature of truth or something at random moments (one of Erikson's key flaws). Esslemont also has a much clearer writing style that Erikson and doesn't get bogged down as much in pointless naval-gazing semantics (as a result the book is easily 300 pages shorter than if Erikson had written it), although on the flipside his writing doesn't quite reach the heights of Erikson when he is on-form. Esslemont also has a great sense of humour going on here, with the increasingly bad luck of the Chief Factor of Cawn and the Untan citizenry's reaction to the news they are being 'liberated' being notable comic high points. The traditional Malazan problem of enigmatic figures turning up, making dire pronouncements and then vanish, only to be explained three books down the line, continues to irritate, however.

Return of the Crimson Guard (****) is a breathlessly enjoyable novel, featuring a relentless, driving pace the Malazan series has not enjoyed since Memories of Ice. It is certainly not flawless, but I found it to be the best overall Malazan novel since Midnight Tides. The book is available in hardcover and trade paperback in the UK. It does not have a US publisher at the moment, but is available from The Book Depository with free international shipping, or as an import via Amazon.com. A two-volume limited edition is also available from PS Publishing.
Posted by Adam Whitehead at 16:13

Email ThisBlogThis!Share to TwitterShare to FacebookShare to Pinterest
Labels: ian cameron esslemont, return of the crimson guard, the malazan book of the fallen