The Sandman: Fables and Reflections by Neil Gaiman

The sixth Sandman collection turns to the ideas of taletelling, leadership and responsibility. Fables and Reflections is obstinately a random grouping of single-issue stories and short narrative arcs that didn't really fit in with the larger, more epic stories that make up the bulk of the series, but the collection is cohesive in theme and consistent in quality. For my money, it may be the best of the Sandman collections; certainly some of the stories in here qualify as among the very best things Neil Gaiman has ever written. 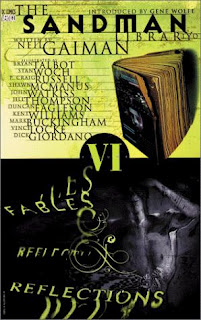 The collection opens with a very short (10 page) story called Fear of Falling. It's a very simple tale, possibly the simplest thing Gaiman has ever written. A New York playwright is terrified that his new play is rubbish, and plans to call it off and dump it. In a dream he finds himself ascending a rock pinnacle, atop which the Sandman is waiting. The dreamer finds himself revitalised and presses ahead with the play. Very simple, yet surprisingly effective.

Three Septembers and a January (Gaiman stole the title from a certain movie script his friend Richard Curtis was working on at the time) kicks the collection off in style. Joshua Norton, a failed San Francisco entrepreneur, is preparing to commit suicide in 1859 after his latest business collapses. Despair of the Endless summons her brother Dream and challenges him to a wager that he cannot give Norton back his sense of purpose. Dream does so, amplifying Norton's tightly-held belief that the USA's lack of moral purpose is a result of it not having a king. As a result Joshua Norton proclaims himself Emperor of the United States of America. Astonishingly, he seems to gain some success. The writer Sam Clemens (aka 'Mark Twain') comes to him for advice, his own stamped banknotes become legal tender in some parts of the city and he earns the respect of several feuding Chinatown gangs. Several attempts to have him sectioned come to nothing, as the city's judiciary points out that unlike some emperors Norton has started no wars and killed no-one. When he dies of natural causes in 1880, over ten thousand people turn out to line the streets of San Francisco and a total eclipse of the Sun takes place. And, brilliantly, it is a true story (well, not the Dream and Despair bit, obviously, but the rest of it is). This is Gaiman at his funniest, most heart-warming and cleverest. The writer disliked it for years as he was suspicious of sentiment, but it has aged very well.

Thermidor, on the other hand, sees Gaiman's dark side kicking in. In 1794 Ms. Johanna Constantine is dispatched by Dream on a dangerous mission into Revolutionary Paris at the very height of the Reign of Terror, during which she runs afoul of both Louis-Antoine St. Just and Robespierre himself. This is a taut, dark and intense story which mixes together Greek legend and French history to great effect. Then we have The Hunt, the typical story of the hero setting out to rescue the princess. Except he's a murderous werewolf. And the story is being told by a New York Jewish immigrant to his granddaughter, who at one point decries it for being too post-modern. It's a nice little story with a cameo appearance by Baba Yaga, but I'm not entirely sure what Gaiman was trying to achieve with it.

August, on the other hand, is terrific. The Roman Emperor Augustus (Octavian) sees two visions of the future of Rome: one where it splutters for a few centuries and dies, but in the doing so sets humanity free, and another where it lasts for ten thousand years and takes the human race to the stars. As he struggles to decide which path to set in motion, he goes out amongst the people to ponder what the Empire is and what it has become. Soft Places sees several travellers lost in space and time meet to share a campfire, including the young Marco Polo and Fiddler's Green, a denizen of the Dreaming. The Parliament of Rooks sees young Daniel Hall, son of Lyta and the baby Dream has taken a special interest in, venture into the Dreaming where he is treated to some stories by Cain, Abel, Eve and Matthew. This is a dark but funny story, and the revelation of how many wives Adam actually had may be illuminating to those who think they know their Bible myths inside and out.

The longest story in the collection is Orpheus, but it's also probably the least satisfying as it is merely a straightforward retelling of the Orpheus story. Anyone who's read their Ovid or even a sketchy account of the Greek myths should be familiar with the basics. Here it is recontextualised as being part of the Sandman universe, but not much more beyond that is achieved. Still, it's fun to finally meet Destruction, based on British actor Brian Blessed.

The collection is concluded with the stellar Ramadan. Caliph Haroun al Raschid is the ruler of Baghdad circa 810 AD, when it is the greatest place on Earth with travellers and traders from every corner of the globe coming to visit the great city. Realising that the city can only decline from this point on, al Raschid summons the Sandman to make a bargain to ensure the city will live on, forever...

Fables and Reflections (*****) is a superb collection of stories and musings about stories. For those wondering why Neil Gaiman is acclaimed as one of the greatest and most imaginative writers of his generation, look no further than this collection and its insightful introduction, provided by Gene Wolfe. It is available from Titan in the UK and Vertigo in the USA. The stories in this collection are also scattered between The Absolute Sandman, Volume II (UK, USA) and Volume III (UK, USA).
Posted by Adam Whitehead at 21:44

Email ThisBlogThis!Share to TwitterShare to FacebookShare to Pinterest
Labels: fables and reflections, neil gaiman, the sandman

This has been my favourite too so far (not got any further yet); I'm almost scared the rest won't live up to it!

Actually, Lilith isn't in the Bible (I think she might be part of some non-Torah Jewish writings?), and there was no third wife in any of the canonical holy texts of the Abrahamic faiths. The story itself is a fascinating invention of Gaiman's that uses figures from common religious narratives, not a straight lift.