By the end of Season 5, Deep Space Nine had long established an identity that set it apart from its progenitor, The Next Generation, and its struggling younger sibling, Voyager. With its darker tone and greater focus on long-running storylines, conflicted characters and the difficult subjects of religion, politics and war, DS9 seemed to challenge the very foundations that Star Trek was based on. Whilst this made the show arguably the most popular Trek series with those who normally didn't like the universe of the Federation and Klingons, it divided Trek fans between those who welcomed its different approach and those who felt it strayed too far from the ideals laid down by Gene Roddenberry. The events at the end of Season 5, with the Federation abandoning Bajor and the DS9 station, allying with the Klingons and launching a pre-emptive attack on the Dominion, seemed to showcase this. 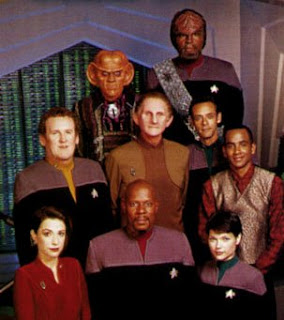 Season 6 of DS9 kicked off with something Trek had never before attempted: a tightly-plotted six-episode serial. Three months have passed since the end of Season 5. Deep Space Nine is in the hands of the Dominion and its Cardassian allies, who are now using the station as their forward command post for prosecuting a full-scale war against the Federation and Klingons. Although a minefield across the mouth of the wormhole prevents them from bringing in reinforcements from the Gamma Quadrant, the Dominion is achieving great victories on every front due to their superior technology and the ability to breed fresh Jem'Hadar warriors to replace those lost on the front lines much faster than the Federation and Klingons can train new soldiers. The series splits into several parallel narratives, as we follow the adventures of Worf and General Martok on a Klingon warship, Sisko and the Starfleet crew on the USS Defiant, and Odo, Quark, Kira and Jake living on the station under Dominion occupation. This is Trek at its most epic, featuring the biggest single space battle ever seen on any Trek series before or since (Operation Return, involving over 2,000 starships) and some of the most startling character developments in DS9's history. As well as the visual spectacle of the CGI fireworks (still very impressive ten years on), there is a fascinating psychological storyline as Kira and the Female Changeling fight a battle for Odo's soul, and Gul Dukat becomes obsessed with defeating Sisko to the exclusion of all else.

Predictably, the Federation soon gains the upper hand and the station falls back into their hands, although the war continues. The remainder of Season 6 is spent following the reverses and successes of the war and features some superb storytelling. In one memorable story the Federation recruits a pool of genetically-engineered geniuses (including Dr. Bashir) to help with war strategy, and their analyses of the Dominion's apparently inevitable victory is a tip of the head to Isaac Asimov's science of psychohistory, as shown in the Foundation novels. Elsewhere, we learn that a much greater and more mythical conflict is taking place between the Prophets and the Pah-Wraiths, of which the Dominion War is but a reflection, and the Prophets' manipulation and use of Sisko and his Bajoran religious nemesis, Kai Winn, in that war makes for fascinating viewing. This season also features what is often called the darkest-ever episode of Trek, when Sisko and Garak scheme, conspire, manipulate and even carry out murder in order to trick the Romulans into attacking the Dominion. The episode in question, In the Pale Moonlight, is one of the most gripping in all of Trek's history. There is also Far Beyond the Stars, in which Trek pays homage to its 1950s SF roots and addresses racism in an honest and surprisingly (for Trek) non-preachy manner. Events culminate in a shocking cliffhanger as a regular character is killed, Sisko abandons his post and the Pah-Wraiths seem to gain the upper hand.

Season 7 is slightly less successful. The opening story arc restores the status quo, of sorts, but a string of stand-alone episodes feel suddenly out of place as the war continues to rage off-camera. Some fans also objected to the inclusion of the recurring holosuite character of Vic Fontaine, a Las Vegas singer and bar-owner who gives the crew advice on their personal problems. However, James Darren (a real-life 1960s Vegas vet who had also acted in The Time Tunnel and TJ Hooker) gives a charming and often funny performance, and he appears in significantly fewer episodes than you might think. Many of these earlier episodes also focus on the new character of Ezri, played by Nicole de Boer, to the slight exclusion of more familiar characters.

These problems are swiftly addressed by the season's halfway point, when the war is brought back into sharp focus and the final nine episodes build to a huge finale. The Federation-Romulan-Klingon alliance is tested when the Dominion aligns itself with another powerful race, the Breen. However, this also tests the Dominion's own relationship with the Cardassians, who are increasingly resentful of their downtrodden position. The evolution of the character of Damar is deftly handled in this arc by actor Casey Biggs as he convincingly goes from stooge to Spartacus in the space of a few episodes. At the same time, the writers' alignment of Dukat and Winn as servants of the Pah-Wraiths is an extremely clever, if horribly inevitable move. The final episode answers most of the series' outstanding questions, resolves most of the characters' storylines fairly convincingly, but also leaves some ambiguities and loose ends for the future. Despite a weak opening, the final season of DS9 achieves something that none of the other Trek series were able to do with their finales: it leaves you wanting more.

Deep Space Nine Season 6 (*****) continues the extremely high quality of the preceding two seasons and gives us more of the successful blend of space battles, comedy, drama and social commentary that has made DS9 worth watching. It is available on DVD in the UK and US.

Deep Space Nine Season 7 (****½) picks up after a slow start to deliver a satisfying conclusion to the series. It is available on DVD in the UK and US.
Posted by Adam Whitehead at 15:46

Thank you so much Adele for sharing the your thoughts. Its really a great TV Show. Totally outstanding.