Few countries in the world are as safe from military invasion as the United States. With vast oceans on two sides and friendly land neighbours on either border, the notion of any large-scale land offensive being possible against the country is pretty amusing. Even the possibility of a Soviet invasion of Alaska during the Cold War seems to have been considered pretty far-fetched, due to the remoteness and harshness of the terrain.

Nevertheless, fiction seems to love throwing up the possibility of a hostile force invading the USA and computer games seem to particularly relish the concept (Red Alert 2 also explored the concept). World in Conflict is set in an alternate 1989 where the faltering USSR, instead of allowing itself to disintegrate, instead lashed out at Europe and, once US forces were fully engaged there, snuck an expeditionary force into Seattle Harbour on disguised civilian freighters. With the US Army fully committed to the defence of Europe, it falls to a small number of army units to delay the Soviet advance long enough to evacuate Seattle, set up a command centre in the Cascade Range, and then launch a counter-attack. 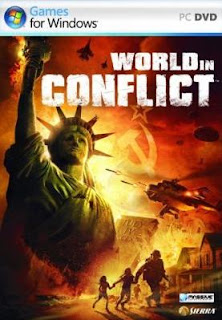 The notion is pretty silly, although the developers try to make it work: the attack on Seattle is meant to divert American resources from Europe rather than as part of a full-scale attempt to invade the USA itself, and the operation is also meant to establish a bridgehead from which a raid can be launched to destroy the headquarters of the USA's SDI or 'Star Wars' programme, opening the US to nuclear attack. However, let's be honest here, this is a solidly enjoyable computer game. The plot isn't of paramount importance.

The game was developed by Massive Entertainment, the masterminds behind the Ground Control games, the finest slices of real-time strategy between the release of StarCraft: Brood War and the arrival of Company of Heroes seven years later. Anyone who has played Ground Control or its sequel should feel at home here. If you haven't, then I thoroughly recommend you remedy that immediately, as those are spectacularly good games. World in Conflict uses the same camera system and the same methods of reinforcement, position-holding and artillery bombardments as Ground Control II. The graphics are better, naturally, but oddly only really for Vista owners using Direct X 10. Windows XP users will note only modest improvements over Ground Control II, rather oddly.

There is no base-building in the game. Instead, you call in reinforcements by 'paying' for them from a pool of points. These points regenerate over time and are awarded for holding 'control points' on the battlefield and destroying enemy units. You also get points towards calling in various off-map aids, such as air strikes and artillery bombardments, which can be decisive in certain battles. Whilst you can't construct bases, if you hold a control point with units for long enough, defensive turrets will appear to assist in the holding of these strongpoints, which is where the biggest battles occur.

The single-player campaign is terrific fun, due to some great writing and the fact the story is told from civilian and grunt POVs as well as those of the generals fighting the grand strategy. I particularly found the story following the two soldiers trying to find some batteries for their portable CD player to be quite amusing. The story is also built a nice manner, as at a moment of high drama it suddenly cuts away to the European front six months earlier and you have to play several missions there before returning to the present. Most of the missions are great fun, with the outstanding highlight probably being the one where you take control of a massive force of helicopters and try to defeat a Soviet special forces squad which has taken over Governor's, Ellis and Liberty islands in New York Harbour.

However, there are key weaknesses. The Ground Control games gave you objectives and left it up to you how you handled them. Changes to objectives happened via radio in the middle of the mission, but you never lost control of your units. However, World in Conflict insists on wrenching control away from you to play some cut-scene every five minutes, which gets annoying. There are also plenty of early missions where there is no reason given for you not to have more powerful units, forcing you to take on Soviet heavy tanks with APCs which have to constantly run away and repair.

Multiplayer is where a lot of the game's focus lies and this is great fun, with different reinforcement techniques and game types giving some good replayability.

World in Conflict (****) is a solid real-time strategy game. If it doesn't live up to the standards of its forebears or the other recent RTS Company of Heroes, it isn't for lack of trying. The game is available on the PC in the UK and USA. A sequel, Soviet Assault, featuring the same events from the Soviet POV and also due for release on X-Box 360 and PS3, has been completed but the unexpected sale of Massive Entertainment to another publisher, its fate is in severe doubt at the moment.
Posted by Adam Whitehead at 00:53

Email ThisBlogThis!Share to TwitterShare to FacebookShare to Pinterest
Labels: world in conflict