On 17 September 1978 a huge number of Americans (60 million, according to some counts) sat down to watch the pilot episode of the original Battlestar Galactica. The original series, starring Lorne Greene (who had won fame on the Western Bonanza), John Colicos, Dirk Benedict (a few years from his success on The A-Team) and Richard Hatch ran for a single season, notching up 24 episodes, before it was cancelled by ABC. Although the audience figures were huge, the budget (over $1 million per episode, vast money by the standards of the day) was crippling and unsustainable. 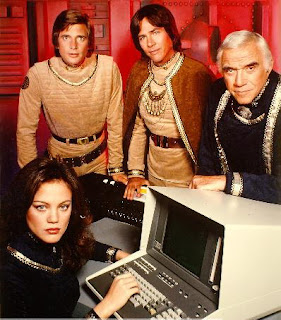 A second season, which allegedly would have dropped the cheese factor in favour of new, harder-SF stories advised on by Isaac Asimov, was already deep in the planning stages when the news fell. However, ABC were still keen to exploit the Galactica franchise and asked original creator Glen A. Larson to develop a much cheaper sequel series (in which Galactica arrives at present-day Earth). The result was Galactica 80, a series so heinously bad it was written out of canon and very quickly cancelled.

Multiple attempts were made to resurrect the show, with original star Richard Hatch keeping the fires burning with a new line of comic books and novels before he produced an amateur mock-trailer filled with modern CGI effects. The show also did well in the VHS market. In 2000 Fox collaborated with the X-Men team of producer Tom DeSanto and director Bryan Singer on a new sequel series to the original starring several of the original cast and picking up the story 20 years on. It was abandoned just weeks before shooting was due to begin due to the uncertainty afflicting the entertainment industry in the wake of the 9-11 terror attacks. Singer also left to work on X-Men 2, and without his name attached Fox felt unable to continue. Surprisingly, the Sci-Fi Channel swiftly stepped in, picked up the rights and David Eick and Ronald D. Moore were brought in to develop a reimagining of the show, which debuted in 2003 and has since become one of the most critically-acclaimed shows on TV. Its final ten episodes air from January 2009.

The modern show, with its critical acclaim and awards, wouldn't have been possible without the original, warts and all. So here's to the original BSG, complete with its annoying kid sidekick, space discos and monkey space dogs, without which the SF TV world would be somewhat poorer.

On Sunday, September 17th, 1978, ABC premiered Battlestar Galactica. THIRTY years ago. How old do you feel now? It seems like everyone remembers May 25th, the anniversary of that other space franchise with Luke what’s-his-name, but why no love for September 17? I know I’ll always remember. Sure, I was teased as a kid for wearing my Starbuck jacket to school and teachers chastised me for drawing Vipers in my notebook when I should have been paying attention in class, but you know what? The day I cashed my first paycheck with words Battlestar Galactica on it is the day I offically told all those nay-sayers to bite me. So yeah, I remember.