The Empire of Tamriel is under a dark threat. The Emperor has been assassinated, leaving behind no heir. Portals to the dimension of Oblivion are opening all over the Empire, unleashing demons and monsters upon a defenceless population. The Blades, guardians of the Empire, seem unable to resolve the crisis. It falls upon a single hero to bring peace back to the Empire...if he can be bothered, that is. 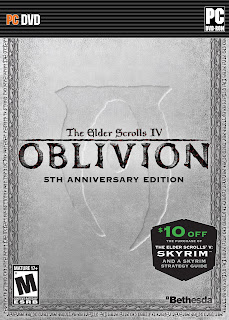 Oblivion is the fourth game in the Elder Scrolls series of roleplaying games (the fifth, Skyrim, came out a few weeks ago). Originally released in 2006, Oblivion was the first game in the series to be developed with the latest generation of video game consoles in mind as well as the series' traditional home on PC, and was an early showcase for the graphical capabilities of those consoles. Five and a half years on, it remains an impressive game, even if time has not been kind to many of its niggling faults.

Like the first three games in the series - Arena, Daggerfall and Morrowind - Oblivion is an open-world RPG which gives the player a huge playing area to travel around in straight away. Whilst there is a core narrative relating to the search for a new Emperor and shutting down the portals to Oblivion, the player is free to completely ignore this in favour of pursuing side-quests, secondary narratives (such as joining the Thieves' Guild or Dark Brotherhood, both of which have extensive questlines of their own) or simply raiding dungeons for loot for personal gain. This freedom is both exhilarating and also daunting, as some players might feel overwhelmed by the amount of choice on offer. For this reason, the game pushes it core storyline much more strongly than previous games in the series to give players something more tangible to hold onto and pursue. 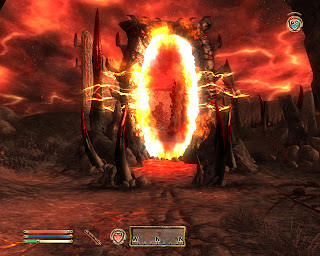 You know the dragons in Skyrim? These are Oblivion's equivalent, only they're crap.
Unfortunately, the central storyline ends up not being particularly interesting, which is annoying as it also seeks to subversively overthrow some of the cliches and conventions of fantasy RPGs. Initially the game leads you to believe that your character is the 'chosen one' who must save the world, but amusingly you quickly discover that you're not. Your job (if you choose to pursue the central storyline) is to find the true heir and clear the way for him to save the world. Essentially, you're a fixer who has to rush around solving problems and leaving the way clear for the real hero to do his stuff. This is a bold narrative decision, but also one that can be potentially frustrating, making you feel like you're playing second fiddle to an NPC. For this reason, the main storyline is rather short (if you concentrate on it and don't get distracted by other quests, you can finish it in less than ten hours) and also teams you up with the 'real hero' only for the final mission of that storyline. However, be advised that starting the main quest (by following directions to the city of Kvatch after speaking to the old dude at the monastery at the start of the game) will result in portals to Oblivion opening all over the countryside and result in constant, extremely annoying, battles with imps and lesser demons when you're simply trying to get around. Completing the main quest closes the Oblivion portals, thankfully.

The game engine is rather old (it was first used in 2002's Morrowind) but was hugely upgraded for Oblivion. On release the visuals were absolutely, jaw-droppingly beautiful and still look impressive today (and can be made truly awesome with high-texture mods). Vast forests, grassy plains, towering mountains, medieval towns and ancient ruins are a constant feast for the eyes, and rendered with tremendous atmosphere. Even more impressive is the freedom you have to travel everywhere: if you can see it, you can walk there. In Oblivion it's often appealing to simply go for a walk or ride through the countryside in a random direction and see what you bump into.

Unfortunately, the game is less accomplished in its depiction of people and creatures. Human characters are stiff, with somewhat oddly-rendered faces and clunky animation. Monsters fare better, with a variety of interesting creature designs. Interacting with other living creatures is also hit or miss. The game suffers massively from a very limited voice cast. Aside from Patrick Stewart (who has about five lines in the whole game) and Sean Bean (voicing the 'proper' hero), everyone else, even major NPCs, is voiced by the same small pool of actors. When Brother Jauffre, a major character in the game, is talking to you in the exact same voice that the innkeeper round the corner was using to talk to a customer who was also voiced by the same actor, any sense of immersion in the game is seriously dented. Dialogue and the writing in general are also, for the most part, cliched and predictable. 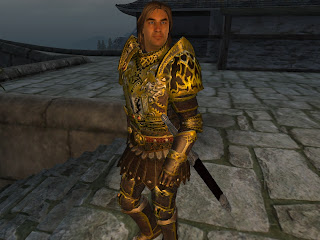 "One does not simply walk into Oblivion. Apart from you, obviously, just by walking up to gates and clicking on them and then going through that tedious tower raid thing again and again. What's up with that?"
Combat and magic use are pretty solid mechanics, with a nice physicality to the combat making it feel like you are in a serious melee. The game allows members of all classes to develop skills outside of those classes, so a sword-wielding mage or a magic-casting warrior are viable possibilities. Unfortunately, the game's levelling mechanic is a little bizarre, since you only level up when your core class skills are practised to a high enough level. Since the entire game world levels up with you (i.e. visiting a wilderness area at Level 1 might result in combat with a bandit in leather armour equipped with a short sword, whilst visiting the same area at Level 20 will reveal a plethora of bandits in magical armour armed with sorcerous blades), there is no real imperative to level up, so it's actually better to pick a class opposite to what you want to play and then develop the non-class skills to high levels. In fact, the level-scaling mechanic is a seriously annoying feature, and one that is a dealbreaker for many players. PC gamers can simply mod the feature out, but console players are stuck with it.

It's a tribute to Oblivion's team of developers that the game can survive an indifferent plot, some bad writing and a series of immersion-shattering, poor design problems. This is mainly down to the inventive and better-written side-quests. Joining the Dark Brotherhood (the assassins' guild) results in a tense, dark-tinged and morally challenging questline that puts the main story to shame. Individual quests are also very strong. Going to sleep on a boat-turned-tavern in the capital's port results in the inn being stolen and sailed out to sea! This leaves you having to take on the hijackers and return the boat to port. Another quest finds you having to venture inside a magical painting to rescue its creator, with a completely different art style to the rest of the game. A visit to a village in night results in you being attacked by invisible fiends, which turn out to be cursed villagers forced into invisibility by a dubious mage (which is a bit harsh if you've already killed several of them without realising what they were). Also, simply not following any quests at all and going dungeon-diving at random can result in memorable encounters and some sweet loot. 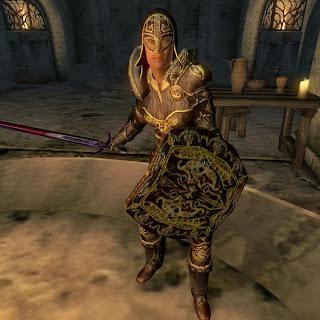 Umbra, noted mass-slaughterer of innocent people if you let her out of her dungeon. Which is a horrendous tragedy but also hilarious.
The central draw of the Elder Scrolls games, and indeed Bethesda's Fallout games which are in a similar vein, is the chance to experience your own narrative at your own pace. No two players will ever play the game in quite the same way or experience the same quests in the same order, and it's this involvement of the player's decision in determining the narrative which can be extremely compelling and result in unique stories. For example, in my first play-through I wandered into a dungeon holding a powerful warrior named Umbra, one of the few non-level-scaled characters in the game. Since I was only Level 3, I died near-instantly. After trying a few different tactics to overcome her and steal her sword (one of the most powerful magical weapons in the game), I gave up and fled the dungeon. As I looked back I saw the maniacal super-warrior chasing me along the lakeside. Fleeing at a full run past a guard patrol, I watched as they engaged Umbra and promptly expired. Still, their sacrifice allowed me time to escape. Thinking no more of the incident, I played on for about another 30 hours, bringing the main quest to completion (amongst many other things). On a whim I decided to travel on foot back to the Imperial City alongside Martin (Sean Bean's character) rather than fast-travel there. As we approached the lakeside, we noted numerous corpses of guardsmen, bandits, monsters and merchants along the road. There were dozens and dozens of them. Hearing a familiar cry, I saw Umbra emerge from nearby rocks and attack. It turned out that Umbra had spent the intervening in-game time (weeks, at least) wandering back and forth slaughtering everything in sight. Now considerably more hardcore and with Lord Boromir Stark at my side, I engaged the nutcase in battle and defeated her, getting her mighty sword just in time for the main quest's climactic, huge battle. Awesome.

It's moments like this that allow Oblivion (****) to overcome its many issues and emerge as a highly enjoyable computer roleplaying game. PC gamers also have access to a truly vast number of mods and expansions which do everything from upgrading the graphics, making the characters more realistic and fixing the level-scaling issues to completely overhauling the game and providing new storylines and entire new maps to play on. The game is available now (in a special edition including the expansions) on PC (UK, USA), X-Box 360 (UK, USA) and PlayStation 3 (UK, USA).
Posted by Adam Whitehead at 12:31

Email ThisBlogThis!Share to TwitterShare to FacebookShare to Pinterest
Labels: http://www.blogger.com/img/blank.gif

Playing this noiw since I can't yet afford Skyrim (maybe for Xmas). Love the "Boromir Stark" line, lol!!

I decided Oblivion was the last Elder Scrolls game I would ever buy. It had the same life cycle on my PC all of their other games have had: Hey, this looks awesome! Hey, look at all the options I have! Hey, what am I supposed to be doing again? Hey, this story is badly written and all the NPC's are lame. Hey, I wonder what other game I could be playing right now!

After having played four Elder Scrolls game without ever having finished one, I realized a weeks work of pretty graphics before massive boredom wasn't worth my sixty bucks.

I've been piddling around with this game for two years. Good hint about the leveling problem! I think I liked Morrowind better. More immersive guild and house quests. Looking Forward to Skyrim but only when it has come down significantly in price.

Playing skyrim And loving it. It may just be the best roleplaying game ever.

I am pretty sure Mr. Wertzone will quit writing this blog as soon as he gets his hands on Skyrim because he will be too busy spending all of his free time playing it! Same goes for the rest of you gamers out there!

I'm playing SKYRIM now, and fortunately it's not a problem thanks to the memory leak bug the designers thoughtfully included which means the game crashes to desktop every 3 hours or so, regular as clockwork :-)