Via Westeros, we have some info on the DVD and Blu-Ray releases for Game of Thrones, Season 1. 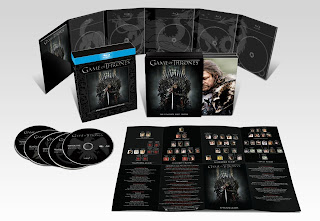 The first season will be released in the UK and USA (and some other territories as well, from the sound of it) on 20 March 2012, about three to four weeks before Season 2 debuts on DVD. As well as all ten episodes, the set will include a plethora of special features.

The Blu-Ray will have the following exclusive items:


The following features will appear on both DVD and Blu-Ray:

Sounds like a pretty good package, considering the amount of time they made us wait for it, and should tide people over until the second season starts airing a few weeks later.
Posted by Adam Whitehead at 13:48

Seems a bit of a waste not to have put it out for Christmas (my gf is especially annoyed), but if that means the set will be a better product then that is fine...sadly, I think it has more to do with politics of having it come out in stores just before Season 2 to ramp up excitement for that second season.

Still, looks like a SWEET set, and a total must-buy!

I really hoped this would have been out for Christmas. Apart from giving me an easy present option, it would have allowed me to re-watch the first season before the second aired.

This release date is too close for me to watch the entire first season before the second begins to air and since I don't want to be watching two separate seasons at the same time I will probably just wait to purchase it until later in the year when the price comes down.

This news is most... Delightful... *creepy eunuch voice*