Here's a knotty problem for a studio to face. What happens when you decide to make a fourth film in one of your biggest franchises, but without any of the three major actors who made the first three films so watchable (particularly when your third movie was a bit of a dog and only saved by their performances)? The decision to make X-Men: First Class as a prequel to the existing movies that was fully open to newcomers was a canny one, allowing 20th Century Fox to effectively reboot the series without throwing away the continuity of the previous films, but the side-effect of losing Hugh Jackman, Patrick Stewart and Ian McKellen must have caused some consternation in the office. However, by bringing in director Matthew Vaughn, hot off the acclaimed Kick-Ass, and casting James McAvoy and Michael Fassbender as the younger Stewart and McKellen, the studio showed some good judgement (which they could have done with on the third movie). 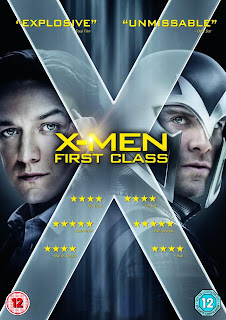 First Class is set in 1962, roughly forty years before the events of the existing movie trilogy. Fassbender's Lehnsherr, a survivor of the concentration camps (the memorable first scene of X-Men is cleverly recreated and expanded on in the opening of First Class), is scouring the world for Nazi criminals and in particular Klaus Schmidt, the Nazi scientist who experimented on him to find a use for his mutation. Schmidt turns out to be a mutant himself, now going by the name Sebastian Shaw (a strong performance by Kevin Bacon), who has attracted the enmity of the CIA and their new mutant consultant Charles Xavier (McAvoy) by orchestrating the rising tensions between the USA and USSR. Lehnsherr agrees to join Xavier's team of 'X-Men' to help stop Shaw's plans, but in the process finds himself questioning whether mutants and humans can ever live together peacefully. Caught in the middle is Xavier's adopted shapeshifting sister, Raven (Jennifer Lawrence) who is conflicted over whether she wants to be 'normal' or be true to her mutant nature.

The inner conflict within the primary characters gives the movie an unusual depth of character for a superhero flick and is true to the themes of tolerance and identity Bryan Singer raised in the first two movies in the series (and handled somewhat more ham-fistedly by Brett Ratner in the third). It also gives us the strongest scene in the movie, as the vengeance-obsessed Lehnsherr confronts two former Nazis in a bar in Argentina in a scene that Tarantino at his best would have been proud of (and the presence of Fassbender speaking German to Nazis in this scene gives viewers of Inglorious Basterds a sense of deja vu). Fassbender's performance throughout is excellent, and he has a great rapport with McAvoy which sells you completely these are the same people as Stewart and McKellen, just younger. That said, the later movies indicated that they were friends and allies for much longer than the few weeks this movie suggests was the case.

Elsewhere McAvoy plays the young Charles Xavier to perfection, respecting Stewart's performance but bringing youthful, idealism and a spark of mischief to the character that makes him sympathetic, even when he is appearing to be naive. Scenes where Xavier has to overcome the wearying cynicism of his team-mates are given weight by McAvoy making it clear that Xavier knows that his attempts to forge peace may be doomed, but the attempt must be made anyway. Lawrence's performance is solid, but her conflicted journey is not as handled as well as it could be, with her decision on what side to join not being sold completely successfully (and there are some continuity issues based on her character's behaviour in the first three films, though nothing too bad).

The film is well-paced, with a solid use of the old standbys of montages, voice-overs and exposition used to effectively a complicated storyline involving a relatively large cast of characters. A slight failure is the depiction of the bad guys: whilst Bacon's Shaw and January Jone's Emma Frost get plenty of screen-time and dialogue, Riptide and Azazel have little to do and nothing to say, and come across as flat as a result.

Elsewhere, the film has effective and impressive action sequences, a rather clever use of real history (though somewhat altered from our own) to enhance the narrative and some nice uses of 1960s imagery and visuals (particularly in the credits sequence). The action sequences are earned by good performances, strong direction and an enjoyable script that is a bit more complex and interesting than many superhero films. There's also a rather cool easter egg for fans of the other movies to watch out for.

X-Men: First Class (****) could have been a potential mess, but it emerges as the second-best movie in the franchise to date (after the splendid X2) and one of the best reboots of a superhero franchise to date. The move is available now in the UK (DVD, Blu-Ray) and USA (DVD, Blu-Ray)
Posted by Adam Whitehead at 22:08