Thousands of years from now, the myriad colony worlds of Hain (including Earth) are being reunited under a new interstellar government, the Ekumen. Genly Ai is the First Envoy, who sets foot alone onto the surface of the frigid planet of Winter (Gethen to its inhabitants) to bring offers of trade, peace and alliance to the people of the planet. However, the genderless inhabitants (who only have sexual urges and genders for a brief period once a month) are sceptical of Ai's claims, and he soon finds himself a pawn of political factions in two neighbouring countries eager to use or discard him as they see fit. 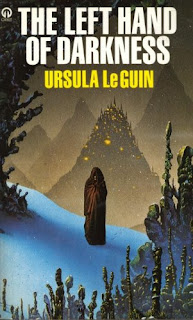 The Left Hand of Darkness was originally published in 1969. It is set in a shared future history which Le Guin has used for several other novels and short stories, though foreknowledge of these other works is completely unnecessary to read this book. The novel also has a formidable reputation as one of the most critically-acclaimed science fiction novels in the history of the genre, noted for its complex themes and its use of metaphors to tackle a wide variety of literary ideas.

The novel spends a fair amount of time talking about the genderless inhabitants of Gethen, who have no sexual urges at all apart from a brief period called kemmer, when they are able to mate and reproduce. Le Guin has put a lot of thought into how not only this works biologically but also the impact it has on society and on the world. Her notions that a lack of sex drive for most of the month reduces the aggressiveness of humans (Gethen has never had a major war) seem obvious, but these ideas are constantly examined and re-examined during the course of the book and she steers away from trite answers.

Whilst the gender theme is notable and the most oft-discussed aspect of the novel, much is also made of the planet's cold climate and the challenges the people face in living in a world mostly covered by glaciers and icecaps where the warm seasons are perishingly short. The politics and divisions between the neighbouring countries of Karhide and Orgoreyn are also described in some detail. As a result Gethen, also called Winter, is as vivid and memorable as any of the human characters in the novel. 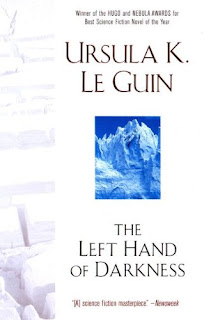 Amongst the individual characters, the dominant ones are Ai himself and Estraven, the Prime Minister of Karhide whose interest in Ai sees him suffer a fall from grace and having to travel a long road to try to redeem himself. The book is told from the first-person POV of both characters, moving between them with interludes taking in myths and legends from Gethen's past and also on matters such as the Gethenese calendar and sexual biology (there's also an appendix which handily collates this information into an easy-to-find collection). The two characters are compelling protagonists, with Ai's bafflement at his status as a man from another planet being considered incidental at best to the trivial politics of two nations leading him into difficulties, whilst Estraven's characterisation is subtle and compelling, with the reader constantly having to review his or her opinion of him based on new information as it comes to light.

The themes that the novel tackles extend far beyond the obvious ones of gender and climate. Duality (expressed in Ai's discussion of Taoism with Estraven), faith, the difficulties of communication even when language is shared and politics are also discussed and examined. But where The Left Hand of Darkness impresses is that these thematic discussions are woven into the narrative in a manner that is seamless and stands alongside a compelling plot. The book's climax, where the two main characters have to traverse a 700-mile-wide icecap with limited supplies, is a fantastic adventure narrative in its own right.

Complaints are few. Written in the 1960s, Le Guin presents a few outdated ideas on gender roles and sexuality that were common at the time, but these are minor issues at best.

Overall, The Left Hand of Darkness (*****) is a smart and intelligent read that has a lot to say and does so in a manner that is page-turning, compelling, relentlessly entertaining and refreshingly concise (the novel clocks in at a slim 250 pages in paperback). One of the all-time classics of the genre and a book that more than deserves its reputation. The novel is available now in the UK and USA.
Posted by Adam Whitehead at 18:02

I do love this book; but what struck me when reading it again a few years ago was how much it reminded me of Burroughs's A Princess of Mars--alien anthropologist getting involved in foreign politics and wars, dealing with foreign ideas of sex (in Le Guin, the pregnant king; in Burroughs, the egg-laying princess).

I'd be curious to hear what you think about "Coming of Age in Karhide," a revisit to Winter that deals more directly with sex and puberty.

Just had this arrive from BookDep, plan on reading during Christmas holidays.

The Left Hand of Darkness was my introduction to Ursula K. Le Guin and even though I read it only a year ago, I think I'm already due for a reread. It's one of those classics for a reason - not only is it interesting and intelligent, but it's well written. It doesn't skimp on characterization, and it builds its world and story wonderfully. Such a great book.