Hadrian and Royce are partners in crime, a mercenary and thief who make a living working for the various nobles who rule over the lands of Avryn but spend most of their time feuding with one another. One particular job ends with Hadrian and Royce being arrested and charged with regicide. Determined to prove their innocence and take revenge on those who framed them, they set out on a quest that could change the fate of Avryn and the whole world. 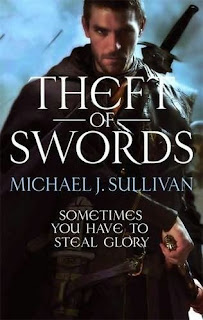 Michael J. Sullivan's Riyria Revelations series is already a proven success, with both small press and self-published editions of the books selling well. Orbit have picked up the series and recast the original six books as three omnibuses, bringing them to a wider audience. Whilst this laudably rewards the author's success, it also raises the stakes: standing out from the crowd in self-publishing is one thing, but how does Sullivan's work stack up compared to the current fantasy heavyweights?

The answer is...okay, actually. Sullivan's ambition with this series was to create a series that in a way beat against the current trend for adult, edgy, violent and explicit fantasy novels in favour of something more straightforward or 'classic'. Something that evoked the spirit of say Eddings or Brooks without being as dire. Sullivan lists Harry Potter as an inspiration, particularly the way it welded together accessibility and a classic structure with darker elements (such as major character deaths), and that's certainly a reasonable ambition. 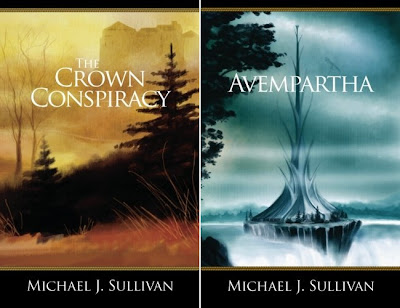 Theft of Swords (which combines the first two novels in the series, The Crown Conspiracy and Avempartha) is a fast-paced, straightforward read with a fast-moving plot and easy-to-read writing. Sullivan's risk in aping the simpler form of fantasy fiction is that he might skirt towards blandness, and this is certainly a problem in the book. He has a fairly blank prose style which is effortless to read, but also somewhat forgettable. His skills with characterisation are somewhat stronger, but still not as great as might be wished. Particularly odd is that his central characters of Hadrian and Royce are not very well-developed at all, and many of the secondary characters are more interesting and better-drawn. The central duo do get a bit more fleshed out towards the end of the second half of the book and we also get a possible reason for why Sullivan had to hold back on certain revelations about them, but it is a bit of a challenge to read a book where the two heroes are so (apparently) shallow.

Other issues can be found in the worldbuilding, particularly the existence of apparently substantial kingdoms with walled cities in them that are only about 20 miles wide. Sullivan aims for some consistency here - a couple of hundred soldiers forms a large army in this world, presumably because populations are correspondingly tiny - but it's still a bit odd. On the racial front, things are fairly traditional: dwarves are geniuses for stonecarving whilst elves are long-lived, pointy-eared types. The only dwarf we meet is a grubby villain, whilst the elves are (in this first book anyway) kept firmly off-screen and are the enemies of humanity, but these are minor (and not particularly unprecedented) twists to the established formula. Naturally, the main storyline also revolves around prophecies, chosen ones whose arrival will signify the end of the world and so on, and it won't take a genius to guess who the chosen one is going to be. 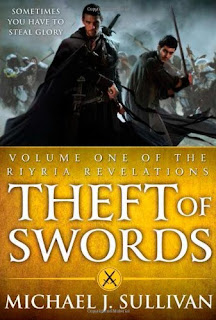 The principle problem with the book is its very predictability. At first, reading an epic fantasy without blood spraying over people's faces every five seconds or two mandatory graphic (and usually badly-written) sex scenes per book is a refreshing change of pace, and feels like a valid direction to take at this time. However, the book's embracing of classic tropes without doing much (or, at times, anything) to subvert or challenge them eventually gets dull. Brandon Sanderson, for example, is also writing classic epic fantasy but remembers to put in plenty of interesting twists: a post-magic-apocalypse setting, a Wild West angle and, of course, lots of original magic systems. These flourishes are absent from Sullivan's debut work.

Theft of Swords (***) is an easy, relaxing read but also one that lacks depth or originality. It's fun enough to warrant reading on (and the series rep has it improving massively as it continues), but I do wonder if publishing these stories as 650-page omnibuses rather than their original 320-page, bite-sized chunks was a mistake. A fun popcorn read, but ultimately not much more. The omnibus is available now in the UK and USA.
Posted by Adam Whitehead at 14:38

Shame the beautiful original covers got replaced with 'man with cloak and sword',

Do you plan to read more books in the series? I'd like to know if they indeed improve beyond standard fare.

I love to listen to Sullivan on podcasts. He's got lots to share on craft and the business side of writing, but I sadly couldn't get into the book. 1st part started off well enough, but the storytelling just wasn't strong enough to excite me.