Harry Dresden is in trouble. He's inadvertently started a war between the vampires and the wizards' White Council, his girlfriend has suffered an unplanned magical transformation and he's in danger of being booted out of his house and office. When a new paying job comes along it seems like a great opportunity for Harry to get on top of his troubles...until he finds himself in the middle of another magical war. 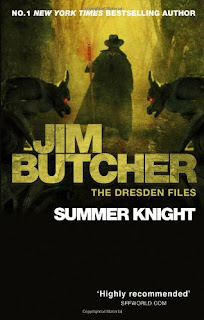 Summer Knight, the fourth novel in The Dresden Files, picks up some months after the events of Grave Peril and is the first book in the series to feature extensive continuity call-backs to previous volumes without a huge amount of exposition about what's been going on. Four books and twelve hundred pages into the series, I guess Butcher decided it was time to stop catering for newcomers and get on with business.

Having covered evil warlocks, werewolves, vampires and ghosts in the first three books, Butcher explores the faeries of his setting in this volume (though they showed up in the previous book, there's more revealed about them this time around). Making faeries work as threatening forces is tricky in supernatural fiction due to the cliches that come to mind when they show up, but Butcher does a good job here, defining the Sidhe of Dresden's world in some detail as threatening and sometimes malevolent beings who are dangerous and tricky to deal with. Their addition to the story, along with more information about Dresden's wizardly colleagues, expands the scope of the worldbuilding nicely. 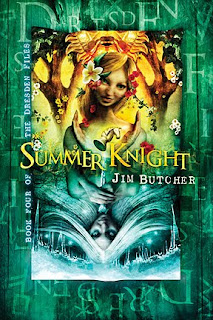 Butcher's prose is as enjoyable as ever, with Butcher continuing a nice line in black humour. This book is notably lighter in tone than the dark Grave Peril, but things are still grimmer than in the first two, slighter novels in the series. The continuation of an over-arcing story arc from the third book (which still isn't resolved at the end of this volume) gives a more epic feel to events, with Harry's mission in the book having larger and more important ramifications in the wider conflict and world. It's good to see returning characters like Billy and his werewolf pack, the Alphas, whilst Karrin Murphy returns to the forefront of the action and, as she puts it, successfully kicks some major supernatural arse in one well-realised action sequence.

At this point The Dresden Files is becoming an enjoyable television series in novel form (which makes the failure of the TV version of the series more of a shame, though that may be down to how much they deviated from the source material). Each novel so far has had a satisfying self-contained narrative, but also added to the mythology and, in the third and fourth books, has brought in larger storylines spanning multiple volumes that bring a more epic feel to the series.

Summer Knight (****) is another well-written entry in a highly enjoyable fantasy series. It is available now in the UK and USA.
Posted by Adam Whitehead at 19:51

Summer Knight was one of my favorites in the series, and I re-read it not long before Ghost Story came out.

I would really like to see a new TV adaptation in the future. Maybe now that HBO's adaptation of A Song of Ice and Fire is doing so well someone will take it more seriously.

I only have Jim Butcher's first book, but I met the guy before he became famous and before his book was made into a TV show. Nice guy, and great author.

Summer Knight was my favorite out of the first 6, but a handful of the later ones blow it away.