The Alloy of Law by Brandon Sanderson

Three centuries have passed since a young woman named Vin and a band of assorted thieves used the powers of the Mistborn to save the world of Scadrial, dispersing the ash-clouds forever. Vin and her cohorts have become figures of myth or religious awe, but time has moved on. Great skyscrapers are racing for the sky whilst steam and electrical power are becoming more commonplace. 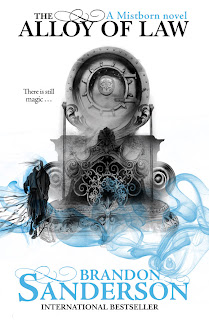 Out in the Roughs, Waxillium Ladrian has spent twenty years trying to bring peace and order to a rough, frontier land. Called home to the city of Elendel by the death of his uncle and forced to inherit his family's estate and business, Waxillium finds trading his six-shooters for cost ledgers to be harder than he'd expected. A spate of kidnappings and disappearance soon tempt him back to a life of law-enforcement, but Wax needs to face his own guilt before he can face down an old enemy.

The Alloy of Law is a (mostly) stand-alone novel set in the same world as Brandon Sanderson's earlier Mistborn Trilogy. Sanderson has previously announced that he plans three trilogies set in this world, one set in a medieval era, one in a contemporary setting and one in a futuristic milieu. The Alloy of Law is a side-story unrelated to these planned future works, though Sanderson layers some hints for the second trilogy into the narrative and also sets up a sequel (or potentially several sequels) for this book in its closing pages.

Written as a side-project to help the author stay fresh whilst bringing Robert Jordan's Wheel of Time sequence to its long-awaited conclusion and coming in at barely a third the length of his last novel, The Way of Kings, it'd be easy to dismiss The Alloy of Law as a bit of fluffy filler to tide his publishers over for a year. This would be a mistake as The Alloy of Law is one of Sanderson's best novels to date.

Sanderson has always been a solid, entertaining author but his most laudable aspect has been the way he's grown and learned with each novel. Arguably his biggest problem has been the length of his books: the Mistborn volumes and certainly The Way of Kings, whilst good books, felt overlong for the amount of plot in them. With The Alloy of Law written as a short side-project, Sanderson has forced himself to write much more concisely, tightly and efficiently than normal, resulting in his most focused, page-turning novel to date. Sanderson has also learned a lot about how to deploy humour in a book (probably learning from his issues - eventually resolved - with handling Mat in the Wheel of Time books), with this book also being his funniest.

Although Sanderson's lightest and most humourous book to date, The Alloy of Law has its share of darker moments, opening with Wax accidentally killing an innocent person and being haunted by it through the book. It also touches upon more epic elements, with several potential references to upcoming storylines in the second Mistborn trilogy. The book also continues Sanderson's tradition of featuring minor links to his other fantasy novels with the appendix apparently being written by the world-hopping Hoid (and featuring a reference to the events of Elantris). The updated setting is another plus point, with the mixture of magic, steam trains, guns and electricity being unusual for a fantasy and blurring the lines between epic fantasy, steampunk and urban fantasy to create something that is more interesting than the norm. Action sequences - something Sanderson has handled quite well throughout his career - are also very strong, with some of his more colourful and memorable battles and duels being depicted here. 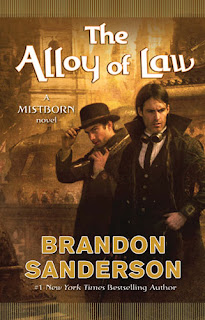 Sanderson delineates his main three characters - Waxillium, Wayne and Marasi - well, though the POV structure is a little distracting. The entire first half of the novel is from Wax's POV but suddenly switches over in the latter half to include Wayne, Marasi and the main villain. It feels that Sanderson could have found a more consistent structure to use than this. He also nicely inverts some cliches, such as when Wax finds himself betrothed to a woman who initially appears to be a severe harridan but becomes more well-rounded a character as the book proceeds.

On the negative side, some of the secondary characters aren't as well-defined as the three heroes. In addition, there are moments when it sounds like the lawless frontier would have been a more interesting setting than yet another fantasy city (albeit one that more resembles turn-of-the-century New York than a typical fantasy conurbation), though the culture clash between the two settings is something Sanderson handles well.

The Alloy of Law (****½) is a tight, well-written fantasy novel that uses traditional tropes and ideas but combines them with an unusual (for epic fantasy) setting to produce something fresh and engaging. The novel is available now in the UK and USA.
Posted by Adam Whitehead at 10:57

Email ThisBlogThis!Share to TwitterShare to FacebookShare to Pinterest
Labels: brandon sanderson, the alloy of law

Well, you could. plot-wise it isnt linked to the mistborn trilogy, but there are minor references to the trilogy which i found delightful.

Although i would strongly advise you to read the 2nd & 3rd mistborn book as well. Like you, I was content at leaving it after the first, but the other books are brilliant