Centuries in the future, the human race has begun exploring the Galaxy, using FTL technology developed by a long-dead alien race. These aliens used 'Senders', huge FTL-boosting machines, to transport spacecraft from system to system. At the heart of the Sender network is Sender One, a vast sphere in the middle of which floats the spherical city of Anachronox. The city is built in districts and levels that shift around randomly, reconfiguring like a spherical Rubik's Cube. Sylvester 'Sly' Boots is a private investigator who is down and out on his luck until a new case leads him on a planet-hopping quest which will have ramifications for the fate of the entire universe... 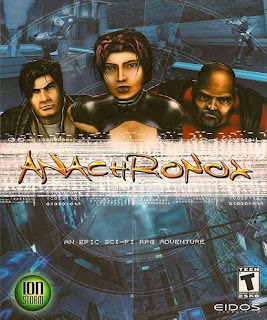 Originally released in 2001, Anachronox was the third and final of the flagship launch titles produced by Ion Storm, following on from the appalling Daikatana and the sublime Deus Ex. A computer RPG, the game used the Quake II engine (then already dated due to the release of Quake III) and was critically lauded upon release. Commercially, it was a failure due to poor marketing, but the game became a cult hit and attracted a small but devoted fanbase who remain active to this day.

It's hard to sum up Anachronox easily. It's a game with plenty of humour, but it's not a comedy. It's set in an SF milieu, but also features superpowers and magic. It was developed by an American studio but features a Japanese-style turn-based battle system (both Chrono Trigger and the Final Fantasy series are cited by the developers as major influences) and several minigames. This mixing and blending of genres makes it a unique game, not quite like anything else out there, but also contributed to its poor marketing and lack of strong sales.

Most of Anachronox is played as more of an adventure game than anything else. You initially control Sly Boots and his AI assistant, Fatima. The game demonstrates its inventiveness and humour almost immediately: Fatima is an associate of Boots who has died, but her consciousness has been preserved as an AI system and placed inside a robot which floats around the environment and is a shaped like a large, metal arrow. Yes, in Anachronox your mouse pointer is a character. This is an awesome idea, and leads to some humourous moments as characters in the city of Anachronox start getting annoyed if you hover your mouse pointer over them, since this results in Fatima's robot body buzzing around them. 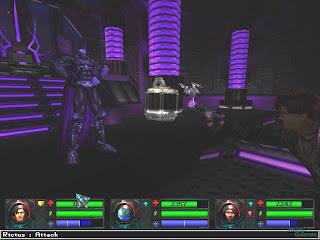 "Er, hi there. Boffo ship you have here."
"I SHALL KILL YOU...WITH DEATH!!!"
This is actual dialogue in the game rather than me taking the mickey for once.
In traditional RPG style, you soon accumulate a large number of companions, two of whom can accompany Sly at any one time. You can switch between these companion characters at will to take advantage of their special powers in combat, or their knowledge in conversations with NPCs. At several moments in the storyline, the game splits the team up and proceeds down several parallel paths simultaneously, with the game moving back and forth between the different characters and sub-teams to tell the story in full. In terms of format, this style of playing will be familiar from the two Knights of the Old Republic RPGs from BioWare and Obsidian, but Anachronox predates them by several years.

One of the highlights of the game's design is that the characters' special powers and abilities in combat are based on their characterisation. For example, Grumpos, the grumpy old man character who reacts to any dialogue options with sarcasm or caustic remarks about how great things used to be, has a special attack that allows him to waffle on at extreme length about various tedious subjects to bore an enemy into a stupor. Combat is played out on a grid which allows characters to position themselves, attack or carry out healing or buffing in a manner familiar from Japanese RPGs. Combat is not a strong focus of the game, however, and a surprisingly small amount of game-time is spent fighting. Battles are also usually avoidable, with lurking enemies visible in the distance, allowing players to choose alternate routes. Combat is enjoyable, especially as its relative infrequency means it never becomes repetitive or tiresome.

Something that Anachronox manages very well is tonal variation. The game has a lot of humour in it, but it also has some extremely dramatic scenes and elements of political satire and commentary as well. It moves between scenes of comedy, drama, tragedy, pathos and satire, and handles these transitions well thanks to some great writing, a fine ear for dialogue and the game's constant streak of inventiveness. 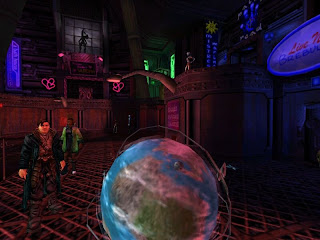 The planet Democratus and its entire population joins the party, meaning that technically Anachronox is the only RPG in gaming history with 2 billion party-members.
It's impossible to talk about Anachronox without mentioning it's most barmy story element. In one lengthy sub-quest, Sly and his team arrive on the planet Democratus, where the ideal of democracy and collective leadership is worshipped but in practice is rather unsatisfying, reduced to a tiny, self-sustaining elite being voted for by a mostly-sheep-like populace who vote on pointless subjects for the most spurious of reasons. The satire here is obvious, but also rather amusing. At the end of the quest, after Sly and his friends have saved the planet from being devoured by a swarm of space-insects, the rulers of Democratus decide to hold a planetary referendum to vote for a suitable reward. Sly and company flee rather than endure the planet's long-winded voting process. Later on in the game, whilst in a bar, the crew are rather bemused when the door opens and the entire planet floats into the room. The populace of Democratus voted to miniaturise the entire planet and join Sly's team. From this point on, the planet Democratus is a member of the player's party and can participate in battles (using a fearsome planetary defense network and its own gravitational field as weapons) as well as conversations. Sly can also seriously confuse and distract NPCs by just talking to them with a 7-foot-wide planet floating over his shoulder.

Later on, after a confrontation with the supervillain Rictus (catchphrase: "I SHALL KILL YOU...WITH DEATH!!!"), our heroes are about to die inside Rictus' exploding ship so Democratus reinflates itself to its full size, scattering the party about the planet's surface (and tearing the ship apart and dumping its exploding engine core in a remote area). The party has to reconvene through a series of sub-quests, including a Quantum Leap-inspired quest set in a mountain village and another one where a down-on-his-luck alcoholic superhero regains his mojo by saving a young girl from death. This latter quest has no dialogue and plays out through music and the characters exchanging facial expressions. It is brilliant.

Criticisms of Anachronox are mainly related to its age. It's an older game now, so players may find it fiddly to get it working on modern systems (this post may be helpful). The graphics have dated somewhat, though this means even people with bottom-of-the-line laptops should be able to play it with no problems. From a game design issue, the opening couple of hours on Anachronox features a lot of fetch-quests and running back and forth through a re-arranging landscape which can be occasionally frustrating. More seriously, the game ends on a titanic, never-resolved cliffhanger (Anachronox wasn't the first game in a planned series, but actually the first half of a storyline that was broken in half due to length). Surprisingly, the game's creators have not ruled out pursuing a sequel, so have never explained how the cliffhangers was going to be resolved (but have promised to do so if they can't get the sequel made by 2021 at the latest).

But that should be no reason not to check out this barmy, inventive, hilarious, nicely-written and finely-characterised game. Anachronox (*****) is still available from Amazon (UK, USA) but surprisingly hasn't yet appeared on digital download sites.
Posted by Adam Whitehead at 14:08

Cliffhanger aside, how satisfying is the rest of the story as a standalone? I've thought about revisiting this game (played up to Democratus when it first came out) but I don't want to put the time in if it ends up being completely unsatisfying.

It's worth it as the ending is pretty epic, though it does have that cliffhanger element. I think the game is strong enough to survive the unresolved ending issue.

It should be noted that "I shall kill you... With Death" was no doubt inspired by Magneto's "Welcome to DIE" line from the X-Men arcade game. Anachronox is easily one of my favorite PC games. Eventually I want to make a playthrough showing many of the game secrets I've discovered. Soon as I get off my fat ass!