The Eddon family is divided and scattered. King Olin is a prisoner of the mad autarch of Xis, whilst Prince Barrick is lost beyond the Shadowline, searching for the fabled Qar capital. Far to the south, Princess Briony is a reluctant guest of the Syannese court. The Qar continue their siege of Shadowmarch, but Hendon Tolly is more interested in unearthing the ancient secrets of the castle than in resisting the invaders. That job falls to the Funderlings, who must mount a stalwart defence of the tunnels and passages below the castle. 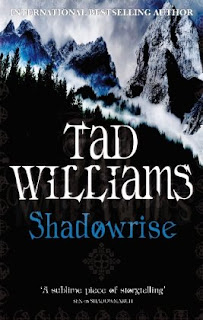 Shadowrise is the third novel in the Shadowmarch series. Originally planned as a trilogy, the final book in the series grew too large to publish in one volume, so was split in half (though each half is almost as long as the first two books in the series by themselves). Williams has form on this, as this also happened with the paperback edition of the final volume of the Memory, Sorrow and Thorn series.

As with the first two books in the sequence, Shadowrise is well-written with some interesting characters. Williams has always had an enjoyable prose style, and that remains true here. Unfortunately, that can't quite overcome several problems. One is that the story unfolds with all the verve, vigour and energy of a particularly lazy sloth on sleeping pills. Chapters seem to endlessly pass which, whilst individually well-written, seem to consist of characters doing little but sitting around and talking about the plot, the backplot and what might happen next, often introducing little to no new information the reader needs to know. 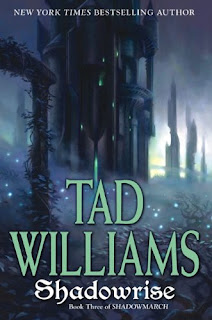 Quite a few of Williams's characters are reactive, spending most of their time wringing their hands and agonising over what to do next. Notably it's those characters who actually make plans and enact them who carry the book, most notably Ferras Vansen and Chert the Funderling. Barrick's journey beyond the Shadowline has an unusual, weird tone to it that is rather different to the rest of the book and features some genuinely unsettling fantastical moments, but is undermined by Barrick's total lack of agency in the storyline. He has no idea about what's going on, neither does the reader, and this makes following that subplot rather tiresome. Worse still is Briony's storyline in Syan, in which it appears that Williams was setting up some rich court intrigue, realised halfway through he couldn't be bothered, and simply ejected Briony from that storyline rather abruptly. Whilst it's good to get this part of the story out of the way, it does render Briony's entire storyline in the last two books somewhat pointless. Also pointless is Qinnitan's subplot, which feels like makework as Williams tries to find something for her to do rather than simply getting her from Point A to Point B.

As the book continues, it starts to pick up some energy towards the end as important plot revelations take place and we actually get some energetic action sequences, rousing the narrative from its lengthy torpor. Naturally these are just in time for the inevitable cliffhanger ending into the final novel in the sequence, Shadowheart.

Shadowrise (***) is readable enough, but so long-winded that it's hard to muster the enthusiasm to carry on at times. Williams has just enough good ideas and interesting characters to make it worthwhile, but unfortunately this novel does little to dispel the impression that Shadowmarch is his weakest major work to date. The novel is available now in the UK and USA.
Posted by Adam Whitehead at 11:54

Interesting. Shadowrise was one of my favourite reads in 2011, and this year Shadowheart will be #3 after "A Dance with Dragons" and "The White-Luck Warrior". I consider Shadowmarch series Williams' strongest work yet.

wow, if the shadowmarch books(that i loved) are seriously his weakest, i urgently need to read more tad williams

Glad I wasn't the only one thinking something was lacking. I gave up out of boredom partway through book 2.
I really enjoyed the Otherland series as well as the single book..War of the Flowers.

I really didn't like this series as much as Memory, Sorrow and Thorn.


I thought it was about 500 pages to long, and spent way to much time fixating on characters who simply weren't that interesting. But characters like Beetledown and Chert redeemed the series for me and kept me from abandoning it.

I love Tad Williams past work, but, this series, I dunno. I agree, I'm on Book 2, and it's a struggle to get through. Written super well, just, doesn't seem to move forward. I may put it aside for something else.