A eulogy for STALKER

RockPaperShotgun has posted a memorial to the STALKER series of games, citing their importance to the FPS genre, their successful depiction of atmosphere and place, and their impressive post-apocalyptic feel (noting how much more oppressive and darker the series' vision is than the recent Fallout games). It's an interesting read, as are the comments for those wondering if they should try out the games. 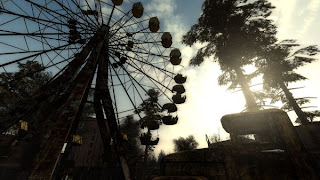 My own experience with STALKER begins and ends - so far - with Shadows of Chernobyl, the first game in the series. Released in 2007 after a lengthy development period, the game was noted for being heavily broken on release, with numerous patches and fan-mods required to bring the game to an acceptable level of stability. Once you got over that hurdle, the game was remarkable. Set in the Zone of Alienation surrounding the Chernobyl ruins, the game depicted a world populated by people and factions vying for their own interests, as well as thousands of animals and mutants who would go about their daily business completely ignoring the player unless you became a threat or got too close. The game had a storyline - actually a rather interesting one, derived from Soviet and post-Soviet Russian science fiction novels and movies - but its characters were lacking and the English translation perfunctory at best.

What the game successfully achieved was a fusion between RPG-style open-world freedom and FPS gunplay. Combat was dangerous but also satisfying, fast and furious, with a solid selection of weapons on display and an impressive amount of freedom to approach combat in any way you might wish. This was as far as you can get from the 'shooter-on-rails' format the FPS genre has since degenerated into. The game's sense of place was impressive given it was based on a real location that has suffered a real cataclysm, giving a creepy, but compelling, atmosphere to the game. This even bleeds over into different games using the same setting: it's no coincidence that the hands-down best mission of Call of Duty 4 (a game that is otherwise the total antithesis of the STALKER series' ethos) was the one set in Pripyat featuring a desperate battle around the famous fairground wheel. But Shadows of Chernobyl goes further in creating a genuine sense of unsettling 'weirdness' that is quite remarkable.

Sadly, I never got further than about halfway through the game, with one crash too many exhausting my patience. I've always planned to go back and try it again with some of the more recent mods, or perhaps to simply go for Call of Pripyat, its direct sequel (the second game, Clear Sky, was a mostly-unrelated prequel and also the buggiest and weakest game of the series by all accounts). With my 'to-play' list starting to rival my 'to-read' list in size, this won't be any time soon. But certainly there's something fascinating about these games, and the closure of the studio making them is a real shame. Hopefully another developer will save STALKER 2 from oblivion and help bring it to release.
Posted by Adam Whitehead at 12:40

Email ThisBlogThis!Share to TwitterShare to FacebookShare to Pinterest
Labels: stalker