Harry Dresden has a lot on his plate: he's been challenged to a duel to the death to determine the outcome of the war between wizards and vampires; he's been hired to find the missing Shroud of Turin; his old girlfriend Susan is back in town for unknown purposes; and, just to round things off, thirty arch-demons are on the prowl in Chicago. And that's not even mentioning a pair of European art thieves hitting town and all three Knights of the Cross turning up to confront a mutual foe. 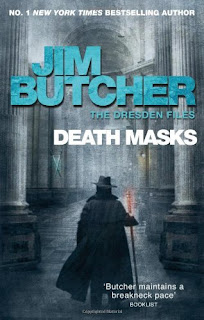 Death Masks, the fifth book in The Dresden Files, is the busiest book in the series to date. It sports at least four distinct plot threads (along with several related subplots) which interconnect with one another in a number of unexpected ways as the novel progresses. Each one of these plots would be enough to drive a novel by itself and Butcher seems to delight in upping the ante and complexity of the series to new heights. Combined with the ongoing, series-spanning storylines, this makes Death Masks the most epic book in the series to date.

That said, Butcher takes care to ensure the story is fully comprehensible at all times, and drives the narrative forward with his customary energy and vigour. He also finds time for some accomplished characterisation, with recurring crimelord Jonny Marcone being developed particularly well. It's also good to see some other characters like Susan and Michael returning, along with the introduction of some intriguing new characters like the Archive (a mystical repository of knowledge taking the form of a little girl) and Nicodemus (a potential new nemesis for Harry). The first appearance of the Order of Saint Giles and the Denarian sect of demons also expands the scope of Harry's world impressively.

Death Masks (****) is another very strong entry in the series. New readers will be lost (I recommend they start with the first book, Storm Front) but returning fans will find yet another page-turning and entertaining urban fantasy novel. The novel is available now in the UK and USA.
Posted by Adam Whitehead at 21:24