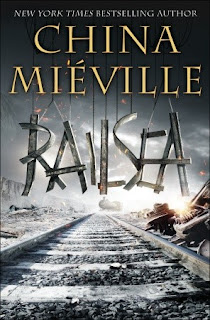 As previously hinted, Railsea will indeed be China Mieville's second YA fantasy novel. The American cover art was revealed a few weeks ago, but now we have a cover blurb as well:

Sham Yes ap Soorap, young doctor’s assistant, is in search of life’s purpose aboard a diesel locomotive on the hunt for the great elusive moldywarpe, Mocker-Jack. But on an old train wreck at the outskirts of the world, Sham discovers an astonishing secret that changes everything: evidence of an impossible journey. A journey left unfinished…which Sham takes it on himself to complete. It’s a decision that might cost him his life.

The novel is currently scheduled for release by Del Rey in the USA and Pan Macmillan in the UK on 15 May 2012.
Posted by Adam Whitehead at 13:53

I'm not usually a YA reader, but if it's got Mieville's name on it, I want to read it.