Camelot is in crisis. King Uther is a shell of his former self, traumatised by Morgana's betrayal. Arthur and the Knights of the Round Table are trying to defend the kingdom from myriad threats, but they are overstretched and unable to prevent Morgana from unleashing her vengeance. It falls, once again, to Merlin to save the kingdom. But to keep his true nature secret, he must again adopt the guise of the old sorcerer Emrys, a deception that will have far-reaching and devastating consequences... 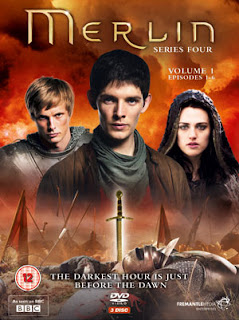 Merlin reaches its fourth and penultimate season by embracing something of a new format. The regular cast has been swollen by the addition of the Knights of the Round Table, former guest characters like Lancelot (Santiago Cabrera) and Gwaine (Eoin Macken) who are now series regulars. Uther, played as always with steely resolve by Anthony Stewart Head, has a much-diminished role as Arthur (an increasingly accomplished Bradley James) rises to the fore, now advised by his uncle, Agravaine (Nathaniel Parker, who veers unpredictably from nuanced to hammy, sometimes in the same scene). Whilst the new format is effective, there is a cynical feeling (engendered by three previous seasons of the series pulling its punches on a regular basis) that we'll be back to the 'farting monster of the week' set-up by episode four at the latest. It's therefore something of a shock when the series undergoes some massive developments in just the first few episodes, and the manner in which these developments are carried out is unexpectedly brutal.

Obviously Merlin - a show which is aimed at a audience 'from eight to eighty' as the BBC puts it - isn't going to go all Game of Thrones and start dropping beheadings and incest on us. But still, compared to the show's good-natured, lightweight approach in the first three seasons, this year gives the series teeth. Some recurring characters are killed off and there are multiple big shake-ups to the series format. The show is more serialised, with less stand-alone episodes than previously. Best of all, there are no tedious comedy episodes this year, with humour instead allowed to develop alongside more dramatic, darker storylines simultaneously. There's also more effective use of computer effects, with the producers realising that 'less is more' and making a few big, well-rendered CGI army shots is better than making lots of middling-quality ones.

There's still a few problems, however. Morgana's new secret hideout seems to be a hut about three miles from Camelot. How this has evaded detection is unclear, especially since Morgana's agent in the royal court frequently rides out (in an over-dramatic gallop) to give her detailed reports on what's going on, again with no-one noticing. There are also long-established problems that reappear, such as the same recognisable patches of forest being used for multiple scenes supposedly set in widely-separated locations. The additional issue of Camelot only appearing to have about 200 men under arms whilst all of the surrounding kingdoms can apparently muster armies in the tens of thousands in hours also recurs frequently, straining credulity.

If you can overcome these issues, Merlin's fourth season (****) emerges as the strongest year of the show yet, by a considerable margin. It is available on DVD in the UK in two volumes. A fifth and final season will air in 2012.
Posted by Adam Whitehead at 20:39

It is one of my guilty pleasures, I know there are things wrong with it, and it is easy to fill a page with a long list of faults. Yet, it still hangs together well, and has genuine on screen chemistry, particularly between Merlin and Arthur (both perfectly cast).

The series is easy on the eye (despite the repeated use of certain locations), and has a genuine warmth that the other BBC behomoth (Dr Who) now lacks.

This series has been the best, as you say, it is the darker moments that make it. Am I wrong in thinking that this show probably has the highest on-screen death count of any to go out at this time ? It doesn't shy away from from death - that's for sure.

My main criticisms are that the Dragon is used almost as a Dr Who's screwdriver to resolve plots, and that despite 4 series now, Katie McGrath cannot act, she uses the same two expressions throughout - shock and sneering.

The are quibbles though, the series as a whole, has been great.

When are the werties coming out?

What, the 'best of the year' posts? When I have some more free time. Probably not until after New Year's, maybe next week.