The armies of the Qar and the Autarch of Xis have converged on Shadowmarch Castle, which now stands siege from enemies attacking by sea, land and underground. Ferras Vansen leads a desperate fight in the subterranean depths under the castle, trying to hold back the Xixians from the mysteries which the Funderlings have sworn to protect for generations. Briony Eddon is also heading home with a small Syanese army, but her resolve to help her people is challenged when she learns that her father is a captive of the Autarch... 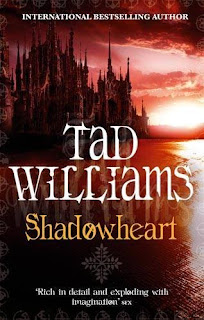 Shadowheart is the fourth and final novel in the Shadowmarch sequence, the third major series by American author Tad Williams. The series is a slow-burner, with a pace that can best be called 'relaxed'. Empires may be forged, armies may clash and ancient secrets may be unveiled, but it all happens at a leisurely, chilled-out rate. This is epic fantasy at its cosiest and most predictable. Which is not to say the series is unenjoyable. Williams has saved the best for last here, with a plethora of battles and a smattering of intrigue to digest before the grand finale (complete with the villains all receiving appropriate come-uppances) and the long, 100-page epilogue in which the characters' fates are all neatly wrapped up and explained. 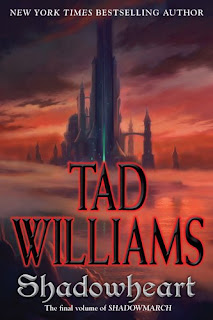 As with the previous books, the best moments are reserved for Ferras Vansen and Chert the Funderling, who are now leading the subterranean war as the Funderlings try to hold back the invading Xixians with the extremely reluctant help of the Qar. These underground battle sequences go on for a bit too long, but for the most part are exciting and tense. This is more than can be said for the scenes involving Barrick Eddon. Having spent two enormous books travelling beyond the mystical Shadowline in search of his destiny, his abrupt return to Shadowmarch smacks of plot convenience at its most blatant. Whilst his character arc was formerly one of the most interesting in the series, as he left behind his life as a crippled royal to embrace an alien culture, here it ends in a damp squib as Barrick becomes more enigmatic and dull.

Despite these issues, Williams ties together a large number of plots, character arcs and ideas that he has established over the preceding 2,500 pages and fuses them into a reasonably good ending. There's nothing too surprising here, but Williams' solid writing skills make it all readable enough. However, the feeling remains that Williams has been wheel-spinning with a series that seems to be more of a tribute to other fantasy works (glimmers of A Song of Ice and Fire and the works of Jack Vance can be detected) and also a call-back to his own earlier (and rather more impressive) Memory, Sorrow and Thorn sequence rather than exploring fresher ground (as he did so successfully in Otherland).

Shadowheart (***½) ends the series in an effective enough manner, but, despite its immense length, this remains a minor work from an author capable of a lot more. The novel is available now in the UK and USA.
Posted by Adam Whitehead at 18:27

Barrick was my favourite PoV character in Shadowheart (in the previous books it was Vansen). Too bad you didn't enjoy his chapters.

I agree that Shadowheart is the best novel in the series.

I found Shadowheart to provide a greatly satisfying conclusion to a full, complex, and very detailed series. As I am a huge Williams fan, but found the conclusions to both MST and Otherland to be very frustrating (i.e. I loved it until the last 5%, then found it threw me out of alignment), I find the conclusion to Shadowheart to be a sign of a maturing writing style and a real accomplishment for Williams. In fact, the pace of the entire series built perfectly -- for each person who noted the first two volumes moved slowly and had too much unresolved detail and complexity, I'd suggest reading the entire series end to end (now that it's complete) and challenge them to question the pacing.