More info on GAME OF THRONES: THE RPG

RockPaperShotgun has some more info on the Game of Thrones RPG due from Cyanide in Spring 2012.

The most notable bit of news is the hithero-unknown (to me, anyway) piece of information that the game uses Unreal Engine 3, which means it should look pretty awesome. The new screenshots accompanying the article confirm this: 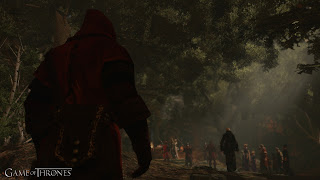 "Cult-looking types up to no good in the forest. They're probably either going to attack me or give me some kind of tedious fetch quest." 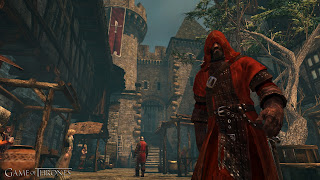 "Seriously, I can't see a fricking thing with this hood up. What the hell am I thinking? Can't take it off now, I'd look weak and indecisive. Hang on, what's that I've just stepped in?"
At the link are some more shots, including one that shows combat in-progress. The game is due for release on PC, X-Box 360 and PS3 in the Spring. Whilst developed by Cyanide, it's a different studio operating on a different continent to the poor RTS released earlier this year, and hopefully should be a better game.
Posted by Adam Whitehead at 22:28

Email ThisBlogThis!Share to TwitterShare to FacebookShare to Pinterest
Labels: a game of thrones (TV series), a song of ice and fire, cyanide, game of thrones: the rpg, george r.r. martin, hbo, news

Better is such a vague term when you take into consideration how awful the RTS game was. That was probably one of the most cynical cash grabs in gaming ever.

This is going to flop just as badly as that awful RTS.

How awesome would it be to take on The Mountain or Rattleshirt in an epic boss fight?? Unfortuneatly I have a feeling this game is going to suck! It would be hard to keep it close to the material, like not including any kind of magic what so ever, and still keep it interesting.