Young lawyer Ryan Newman has lost his job and is left feeling depressed and contemplating suicide. Taking up an offer to dogsit his neighbour's pooch, he is bemused to find that he sees Wilfred as a guy in a dog costume, whilst everyone else sees him as a real dog. Wilfred, a pot-smoking connoisseur of movies and TV, befriends Ryan and helps improve his self-confidence...but he also commits random acts seemingly designed to annoy and undermine him. As their relationship develops, Ryan tries to work out who or what Wilfred really is. 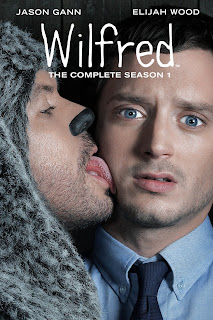 Wilfred started life as an Australian TV show before being transplanted to the USA, with co-creator/actor Jason Gann reprising his role as the eponymous man/dog/hallucination/whatever. It is a surreal show mixing elements of relationship dramas with comedy, geek-friendly references and even hints of tragedy. The show's central 'mystery' - who or what is Wilfred? - is kept at a fairly low ebb through most of the first season, only really emerging to the fore in the last episode. The creators gleefully play on the audience's past experiences with such mystery-based shows, with Wilfred eventually revealing to Ryan (Elijah 'Frodo Baggins' Wood) his secret is that he needs to get off the Island and evade the smoke monster ("I've seen Lost!" "What did you think of the ending?"), to Ryan's frustration.

The show's comedy is based around the bizarre relationship between Wilfred and Ryan, with Wilfred expressing canine-like behaviour in human terms but still being susceptible to dog foibles (being distracted by a bubble machine, mesmerised by a laser pointer on a wall or forming a lasting sexual relationship with a stuffed toy). From the other direction, Ryan's self-confidence and ability to form friendships has been eroded to the point where he seems to become psychologically dependent on Wilfred. However, as Ryan recovers his self-esteem he reveals a cold and manipulative side which is surprisingly harsh (and masterfully showcased in the season's grand finale).

Whilst there are a few recurring castmembers and some great cameos (My Name is Earl's Ethan Suplee, Malcolm in the Middle's Jane Kaczmarek, The Hangover's Ed Helms and a totally random appearance by Eric Stoltz), the show is mostly a two-hander between Gann and Wood. The two actors are on top form throughout the series, whether it's engaging in a dramatic showdown in the rain on a hospital roof, trying to catch each other out with Dune quotes or assessing Ryan's ability to watch an entire season of The Wire in one sitting ("That stuff is dense!"). Wood undercuts his young clean-cut image through his portrayal of a character who takes drugs and, increasingly as the season progresses, emotionally manipulates those around him, whilst Gann is simply excellent as the morally questionable Wilfred (complete with a slightly surreal English accent he puts on whenever he does anything villainous). Neither character is hugely likable, but they are certainly entertaining.

As the season progresses we get more clues as to what is going on (most notably in an episode involving Mary Steenburgen as Ryan's mother, who is in a home for the emotionally bewildered) before the impressive finale, which takes together a number of very minor and apparently unconnected subplots from throughout the season and ties them together neatly to form an impressive cliffhanger. On the negative side, there is a slight feeling of repetitiveness to the premise (though the writers do a good job of keeping things as fresh as possible) and the un-likability of most of the characters occasionally makes watching the show feel slightly pointless, until the next clever line or nice piece of characterisation comes along. However, the episodes are short, sharp and amusing enough to keep things moving along nicely whenever they do start to flag.

Wilfred: Season 1 (****) is an entertaining show with a nice line in self-awareness. Whether the premise is strong enough to support multiple seasons (a second season is on its way for next year) remains to be seen, but so far it's worth watching. The show will be released in the next few months in the UK (DVD) and USA (DVD, Blu-Ray).
Posted by Adam Whitehead at 19:14

Email ThisBlogThis!Share to TwitterShare to FacebookShare to Pinterest
Labels: wilfred

Have you watched the original series? It's bloody awesome. I've not watched the Merkin remake but plan on doing so soon as I suspect they went a lot darker than the original.

I'm surprised you rate this so highly. About 20 of my friends and myself had high hopes for this series, but we all quit watching by the time the 6th episode ran. Between the constant negativity, fewer laugh-out-loud moments as the series progressed, and the unlikable characters, we all gave up on it.