War in Heaven by Gavin Smith

There is a war in the digital realm. The nefarious military leader Rolleston has unleashed Demiurge, an ultra-powerful AI which seeks to control and consume everything else on humanity's computer networks, to guarantee himself ultimate power. A band of opponents and self-appointed freedom fighters, led (reluctantly and often shambolically) by ex-soldier Jakob Douglas, have fought back by unleashing their own AI onto the net to expose everyone's dark and dirty secrets, which has not gone down well with the great and the good who rule the Solar system. Of course, Jakob also had to go and call this AI 'God', utterly enraging the (very large) religious portion of the human race as well. Still, God has won the first round, banishing Demiurge, Rolleston and their followers to the colony systems. 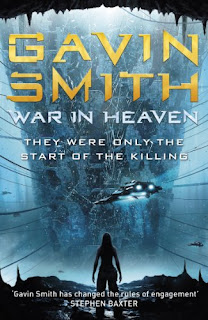 With Rolleston and his forces gathering strength in the colonies and preparing for a fresh assault on Earth, it falls to Jakob and his colleagues to pursue them and finish the job that they began. But with Jakob's allies including an alien race who until recently had been slaughtering humanity relentlessly for decades, a drug-addicted journalist and a bunch of superstitious hackers, this mission will not be an easy one.

War in Heaven is the sequel to last year's Veteran, Gavin Smith's well-received debut novel. Refreshingly, this is the conclusion to the story (no trilogies here, thank you very much) and the story ends in a pretty definitive manner which seems to limit the chances of a follow-up. As such, those who've held off on reading Veteran until the story was completed can now proceed with confidence.

Like Veteran, War in Heaven is a hard-edged novel mixing elements of space opera, military SF, cyberpunk and horror. It's heavy on the action, but also features a decent amount of character development, with the character of Jakob (our first-person protagonist) being repeatedly taken apart and his motives analysed, along with those of his friends, though often in a manner skewed by Jakob's own perspective. This focus on characterisation as well as on action and battle sequences helps give depth to what could have been a fairly straightforward military SF novel. Unfortunately, there are a few too many moments (and a few more than there were in Veteran) when this introspective edge slips over into characters pointlessly sitting around and talking about the plot for pages on end instead of getting on with business, which tends to result in slightly uneven pacing. The novel has a stop-start feel, increased by is episodic structure: the book is divided into several distinct sections, set in different locations with different tasks to be accomplished.

Smith encourages you to overlook that through some interesting musings on morality and taking responsibility for your actions, as well as a lot of black humour and some nice meta-commentary on science fiction cliches. There's some clever plot twists and the resolution to the story is reasonably well-set-up, though the full impact of some massive events that happen during the finale is lost due to the limits of the first-person perspective. He also delivers great action sequences, involving personal combat, mech battles and space engagements, and succeeds in keeping these elements fresh and intriguing.

War in Heaven (****) is a worthy successor to Veteran and concludes the storyline begun there in a very solid manner. Smith is a talented writer and a strong new voice in the SF field, but some problems with pacing and over-exposition lightly mar this first duology. Certainly he is a writer to watch. The novel is available now in the UK and on import in the USA.
Posted by Adam Whitehead at 19:01