David Yates, the director of the fifth through eighth Harry Potter movies, has revealed that he is working on a Doctor Who feature film. Apparently the movie will not tie in with the existing continuity of the TV series, presumably meaning a new cast but based on the same premise. At the moment neither Russell T. Davies (who resurrected the show in its current incarnation in 2005) nor Steven Moffat (the current showrunner/producer) are involved with the project, though BBC Enterprises are working on the movie. In particular, Jane Tranter, the person who brought back Doctor Who in 2005 whilst working as Head of BBC Drama, is producing. Tranter and Yates previously collaborated on the BBC mini-series State of Play, probably the finest British television series of the 2000s. 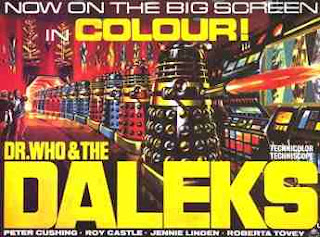 The poster for the 1965 Doctor Who feature film.
Although this news has sent paroxysms of nerdrage through the Internet, this is actually the third time this has happened. Back in the 1960s two feature films were released that were separate from the TV continuity but stood alongside it quite well. Peter Cushing played 'Dr. Who' (a human scientist, rather than an alien called 'the Doctor') in Doctor Who and the Daleks and Daleks: Invasion Earth 2150AD. There have also been several other 'out-of-continuity' Doctor Who stories, such as stage plays (some of them featuring TV Doctors such as Jon Pertwee and Colin Baker) and web series (one featuring Richard E. Grant as a non-canonical version of the Ninth Doctor). Whilst this new film (if made) will be much bigger in profile and magnitude, there is no indication that it will supersede the TV series or replace it when made.

Based on Yates's comments, it sounds like the film is a minimum of three to four years away.
Posted by Adam Whitehead at 20:20

Email ThisBlogThis!Share to TwitterShare to FacebookShare to Pinterest
Labels: doctor who, news