Adventures with the Wife in Space by Neil Perryman 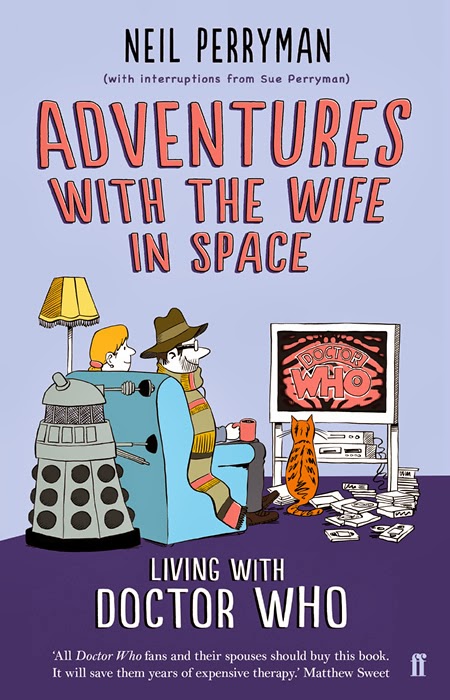 The result is not this book. Instead it's a blog, to be found here. The experiment took in watching 700 episodes and 156 serials over the course of two years, accumulating half a million words in the process. It would have been cheap and easy to simply condense the blog into a book format, but fortunately Perryman doesn't do that. Instead, the book is more about the experience of being a Doctor Who fan and the love/hate relationship that inspires with the show. It's also about the relationship between someone who is a geek and SF fan and someone who is - apparently - a 'normal person'. The result is a book that works surprisingly well on number of levels. It can be read by Doctor Who fans - the author slips in a few in-jokes only they will get - as well as their spouses/children/partners, who will find themselves sympathising more with Sue and her daughter as Neil makes another doomed attempt to get them into the show. The relationship dynamics at play are quite interesting, and it is amusing to discover the things that Sue obsesses over as well (such as carpentry and house renovations).

It helps that Neil Perryman is an engaging writer, with prose skills honed by many years working on various Doctor Who websites, attending conventions and working as a university lecturer. He has a dry sense of humour and a level of self-awareness over the crazier aspects of Doctor Who fandom - which sometimes inspires him to do ill-advised things as a wince-inducing encounter with Colin Baker demonstrates - which is entertaining. Perryman knows when to explore a subject in further depth and when to briskly move on to more interesting topics. There's also occasional, Dave Gorman-ish diversions into statistics and how Sue's view of individual episodes compares to the fandom's, which could be dry but ends up being amusing (especially how Sue's least-favourite Doctor ends up providing the highest-rated episodes). Mostly, it's a book about a relationship between two people with very different interests and how they manage to bridge that divide. The cover blurb that the book may work as therapy may not be as far-out as it sounds.

Adventures with the Wife in Space (****½) is a book for Doctor Who fans and non-fans who have to put up with them. It bridges the gap between SF fans and non-fans and presents differing perspectives of fandom. It's also funny and occasionally even sweet (without ever getting twee). The book is available now in the UK and USA.
Posted by Adam Whitehead at 11:45

Email ThisBlogThis!Share to TwitterShare to FacebookShare to Pinterest
Labels: doctor who, neil perryman