Richard Morgan has confirmed that he has finished The Dark Defiles, the concluding volume of the Land Fit For Heroes trilogy which began with The Steel Remains in 2008 and continued with The Cold Commands in 2011. 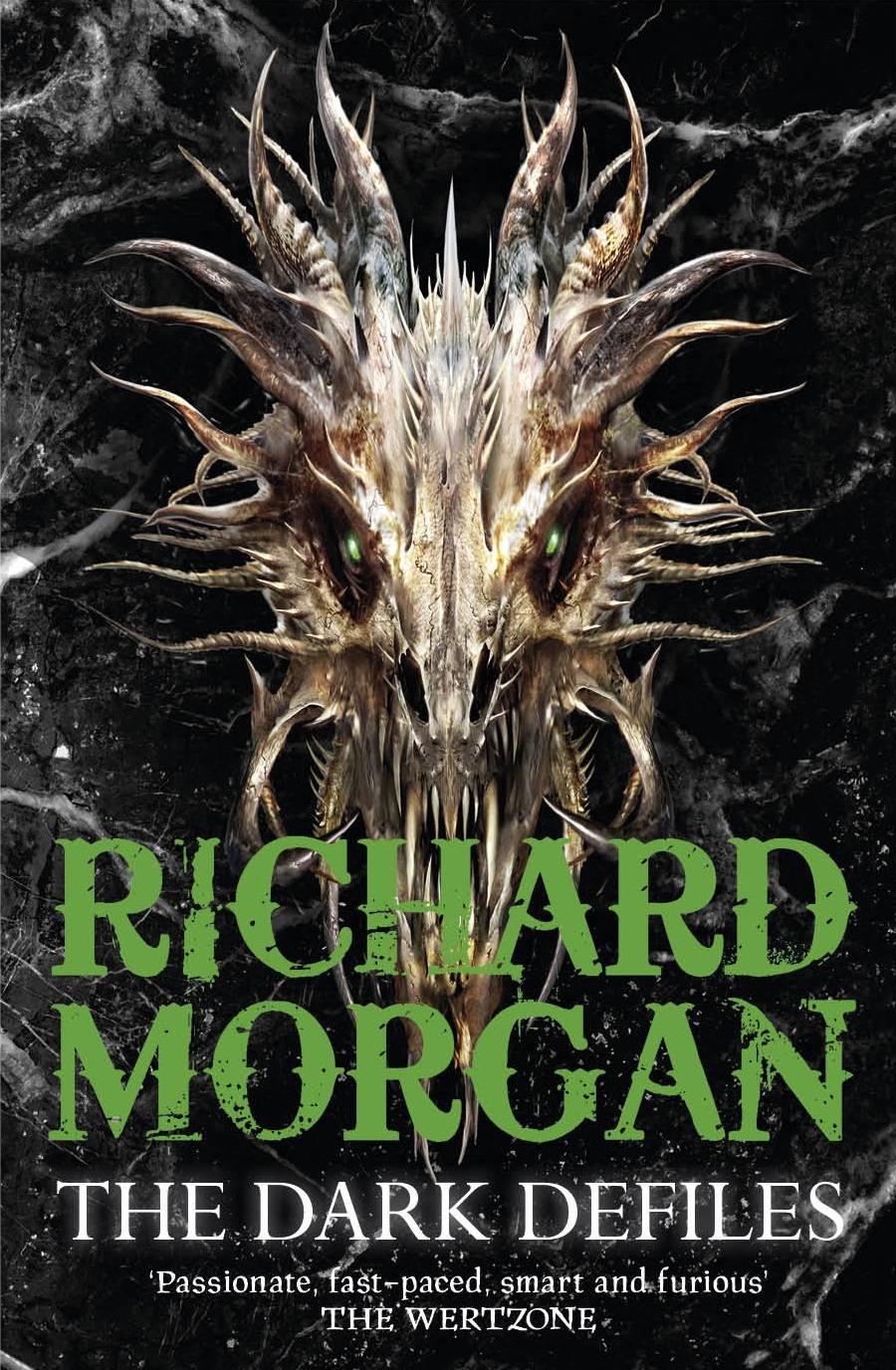 As Morgan says, this is by far the longest book he's ever written. At 247,000 words, it's a little bit shorter than Patrick Rothfuss's The Name of the Wind (259,000 words) and almost half again the length of The Cold Commands. At one stage the book was getting so big there were talks about splitting it, but that fear seems to have passed.

The book is listed as being released in the UK on 21 August and in the USA on 7 October, though neither date is finalised yet.

Great news. Morgan has reported that his next project will probably be SF, possibly set in one of his already-existing universes, so it'll be interesting to see what he comes up with. In the meantime, we have one very large fantasy (with SF overtones) novel to tide us over with.
Posted by Adam Whitehead at 15:37

I could have sworn I'd read that the series would be 5 books. Is this a change?

That cover reminds me of the ones that grace Brian Lumley's Necroscope books.
Do you know if it was done by the same artist?

No, it was looking like it might go to 4 books at one point, but they've kept it at 3.

However, the Land Fit for Heroes trilogy does take place in the same universe as three of Morgan's other books, so on that basis there's 6 of them ;)

As for the artist, I can't find out who did the Morgan cover right now so I don't know.

The only author that makes gay alien love cool again!

Seriously I will pick it up, I kindof like his barbarian hillsman character more than Ringil though.

What are the 3 other books in the same universe?

The Takeshi Kovacs books. The 'fantasy' novels take place in the same universe, only centuries/millennia/aeons later.

Richard has hinted that the books take place in the same universe and there are a couple of Easter eggs but to state that absolutely is more than a bit presumptive.

Well, there are characters from the Kovacs books playing a role in the fantasy ones and they directly mention events from the earlier books. That's not really being presumptive, that's just reporting the facts.

Well, the god/Sky Dweller/thing Takavach is Takeshi Kovacs himself ;) Or maybe some kind of AI simulation of him, at any rate. It's hinted at in THE STEEL REMAINS, but in THE COLD COMMANDS he makes references to things that sound like Kovacs's adventures and the orbiting defence satellites. He also mentions travelling from star system to star system via needlecasting.

Amazon's got it for preorder...in paperback and audio cd? No kindle, wth???