For its fifth season, Star Trek: The Next Generation had a bit of a shake-around. The character of Ro Laren was introduced as a periodically recurring character to replace Wesley (who had departed in the previous season) and there was a dialling back of the more intricate continuity that had bound parts of the fourth season together, with more emphasis on stand-alone stories. This had mixed results: several of the very finest episodes the show has ever produced sit alongside some of the worst episodes to air since the first season. 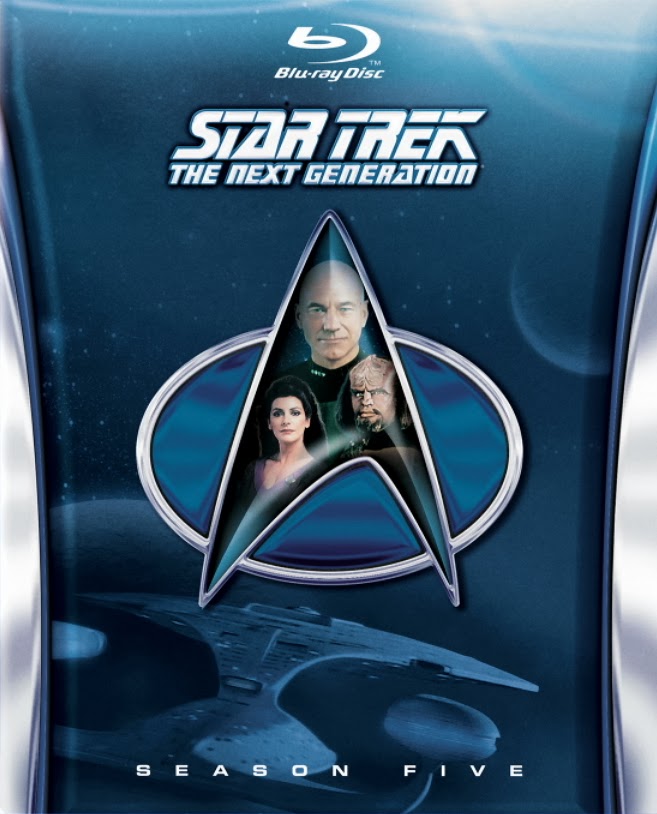 Things get off to a promising start with the continuation of the Klingon Civil War and Romulan arcs that dominated the fourth season. Redemption II does a good job of wrapping up those storylines and the Unification two-parter deals with lingering issues, but it's surprising that we don't hear any more about those storylines again. Unification also works as a solid character vehicle for Leonard Nimoy as Spock, who appears in a cross-over event to promote the-then contemporary movie Star Trek VI: The Undiscovered Country. Nimoy is splendid as usual, but the story continues The Next Generation's tendency to have great setting-up episodes in the first part of a two-part story only for the second to throw it away with a rather dull conclusion.

Elsewhere, the season features several all-time classic episodes. Darmok, which forces Picard to work alongside an alien who can only speak in metaphor, is a terrific slice of television (if highly implausible) with some great chemistry between Patrick Stewart and Paul Winfield as his alien counterpart. The fact that the mere mention of "Shaka, when the walls fell," can trigger meme-like quotes of the episode almost twenty-two years on is a testament to how good it is. Ensign Ro introduces the titular character and promptly breaks several of the show's key rules (not having conflict between Starfleet officers and not basing episodes around the guest star of the week) to excellent effect. Michelle Forbes is terrific as Ro and her recurring appearances are highlights of the season. Disaster and Power Play are effective siege stories (in the former case due to a catastrophic accident and in the latter due to alien possessors taking hostages) and The Next Phase is a fun adventure for Geordi and Ro. Cause and Effect is a great remake (but in a bit more depth) of a Red Dwarf gag. But the outstanding season highlight is The Inner Light, in which Picard gets zapped with the memories of aliens who have been dead for a thousand years and get to see how his life might have played out in other circumstances, complete with children and a loving wife. Patrick Stewart is magnificent and the episode deservedly won a Hugo Award. It's The Next Generation's City on the Edge of Forever, only better.

Elsewhere, we get a lot of mediocre-to-okay episodes. Silicon Avatar is a bit of a weak resolution to the Crystalline Entity storyline that began back in Season 1, whilst A Matter of Time is a very cheesy episode elevated by a terrific guest turn from Matt Frewer. This use of quality guest stars also redeems The Game and The Perfect Mate, which could have both been weak without some great appearances by Ashley Judd and Famke Janssen (both before their later movie careers took off) to elevate things. The Masterpiece Society is a potentially very good episode wrecked by the main threat in it being rather over the top (the stellar fragment would completely destroy the planet Picard is trying to save, rendering their ethical objections to the disruption of their society moot). Conundrum is an effectively tense episode. Ethics is reasonably good, invoking a moral dilemma and putting Crusher on the 'wrong' side of the debate with Worf's life at stake. The Outcast tries to say some interesting things about sexuality and gender issues but back-pedals away from anything too controversial and ends up being notable more for being one of the very few episodes of the series where our heroes 'lose'. The First Duty adds some urgently-needed shades of grey to Wesley and humanises more than his first four years on the ship combined did. I, Borg humanises the Borg for some great drama (and a great guest turn from Whoopi Goldeberg as Guinan) but this comes at the cost of destroy the Borg's otherworldly implacability, reducing them to the status of just another alien race.

Against that we have Cost of Living, literally the worst episode of the series to air since Season 1. Hero Worship and Violations aren't far behind it, and Time's Arrow, despite a few good moments, is easily the worst season cliffhanger Star Trek has done in its history.

For this HD re-release of the season, CBS have, as usual, done an outstanding job. The episodes look like they were filmed yesterday, the special effects are astonishing (even moreso given they - in the main - have not been redone from scratch but are the original effects footage remastered) and overall the visual and sound quality of the series far surpasses that of the standard definition versions. The only slight disappointment is that there seems to be more missing film stock for this season than the previous ones, resulting in a few more noticeable moments (though only a few seconds each) where the SD footage has been upscaled instead. This is easily bearable, however. Slightly more disappointing is the quality of the special features. There's some nice stuff on the music, but the on-going documentary about the making of the series gets sidetracked by Gene Roddenberry's death during the making of this season and overlooks the opportunity to talk about many interesting episodes. It may be that the producers were starting to run out of ideas about what to do for special features for the fifth set in a row, which is disappointing.

The fifth season of Star Trek: The Next Generation (****) is a mixed bag, with some dire episodes and a fair few middling ones. However, the quality of the best episodes elevates the whole thing and certainly makes it worth watching. The season is available now on Blu-Ray in the UK and USA.
Posted by Adam Whitehead at 20:50

Darmok is actually a pretty divisive episode, from what I've seen. I guess it all depends on whether you're willing to buy into the central concept (which I am; it's my favourite episode of the entire series).