Miles Vorkosigan graduates from the Imperial Academy on Barrayar and is immediately assigned as a weather specialist on a remote arctic base. Given that he knows nothing about weather science and was expecting a space posting, Miles is unhappy with his assignment. However, what starts off as a minor job soon has Miles travelling to distant worlds, hooking up with some old friends (and enemies) and getting embroiled in a major interstellar incident. In other words, it's business as usual. 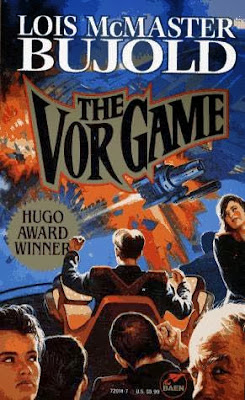 The Vor Game is the fourth novel (by chronology) in The Vorkosigan Saga and the second to feature its signature character of Miles. The novel picks up after the events of The Warrior's Apprentice with Miles now graduated from the Academy and ready to start his life of military service. As previously, Miles's physical weaknesses (he suffers from brittle bones and is stunted due to a poison gas attack on his then-pregnant mother) both hinder his ability to get involved in the action and also act as an easy means for his enemies (and friends he's trying to avoid) to identify him. Once again, Miles has to use his wits and intelligence to overcome obstacles and emerge on top.

This time around the obstacles include a psychotic military base commander, almost dying of exposure, being captured, being enslaved, almost being shot and being pursued by a lunatic femme fatale with delusions of becoming Empress of Barrayar. As with The Warrior's Apprentice, the book starts simply enough and then snowballs, accumulating plot points, characters and complications with almost frenzied energy.

As with its forebear, the book is a highly readable, page-turning experience. Bujold knows how to pace even a complicated story (and between the bluffs and double-bluffs, this book has become fairly complex by the time it ends) well and combine it with action as well as character-building material. A key theme in this novel is that Miles has problems with subordination, which is a bit of a problem in a military hierarchy, and his way of dealing with the crisis in this novel provides an idea on how Barrayar can use him to further its goals despite his limitations.

As usual, Bujold mixes out-and-out moments of high comedy (though The Vor Game isn't as much of a comedic romp as The Warrior's Apprentice) with darker moments. Despite starting in a completely different place, it's also very much a continuation of The Warrior's Apprentice, with some character arcs continuing between the two novels. If The Vor Game has a major problem, it's that it's slightly too reminiscent of its forebear. This is very much The Further Adventures of Miles Vorkosigan and if you enjoyed the previous book, you'll like this one too. Bujold knows how to tell a ripping yarn and keep the pages flying, but this novel lacks originality and it lacks the previous novel's ability to spin on a dime between tragedy, comedy and drama. I was rather surprised to learn that The Vor Game is a Hugo Award-winning novel, both because it wasn't as good as the competition (The Fall of Hyperion was a better novel in the same year, probably Earth as well) and it's not quite as good as The Warrior's Apprentice.

Still, The Vor Game (****) is a fine, entertaining SF novel. It is available now in the UK and USA as part of the Young Miles omnibus, along with The Warrior's Apprentice and the novella The Mountains of Mourning.
Posted by Adam Whitehead at 12:42

This Miles yarn is a very enjoyable book, but I agree that "Fall of Hyperion" was robbed of the Hugo that year.