Monstrous creatures called dredges are invading the kingdoms ruled by both men and the giant varl. On opposite sides of the continent, two separate forces have to fight their way through the dredge hordes and guide both their armies and the civilians under their protection to safety...if they can find any. 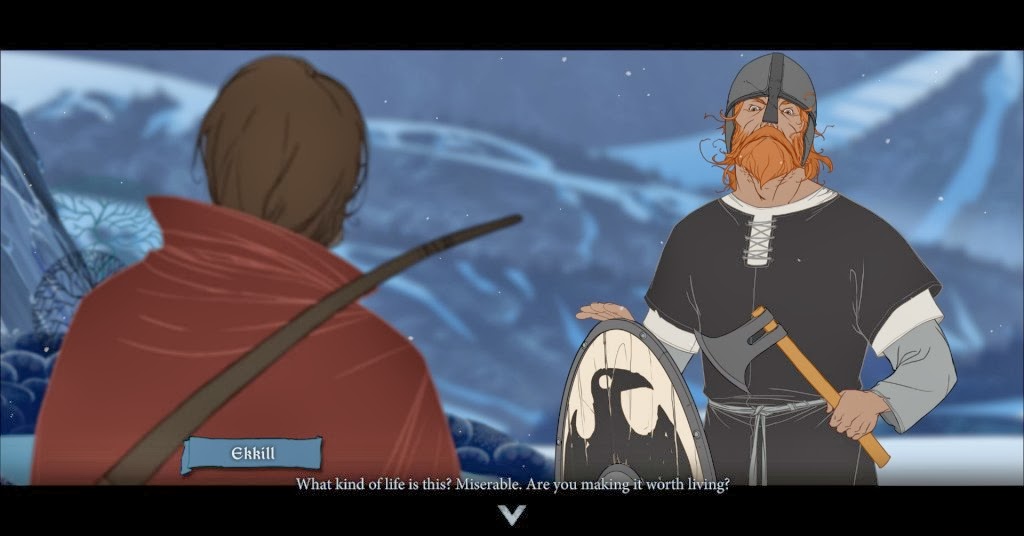 The Banner Saga is the debut game from Stoic, a new development team made up of ex-members of BioWare. In contrast to BioWare's big, epic 3D RPGs, The Banner Saga is a 2D game which mixes tactical, pause-based combat with an epic story and making decisions which can dramatically alter who lives and who dies in that story.

Gameplay is undertaken in two modes. In one mode, your caravan is on the road and has to cope with limited supplies, dwindling morale and disputes within the convoy (a bit like The Oregon Trail). Morale can be boosted and characters upgraded by making camp, but this eats up valuable supplies. You can purchase more supplies at towns (and sometimes from passers-by) by using Renown, but this is also the resource used to level up your heroes. The game thus forces you to make harsh decisions: use Renown to increase your characters' combat skills at the expense of civilian lives in the caravan, or concentrate on getting as many people as possible to safety, but perhaps storing up trouble by not preparing your heroes for the tougher enemies who appear later on? 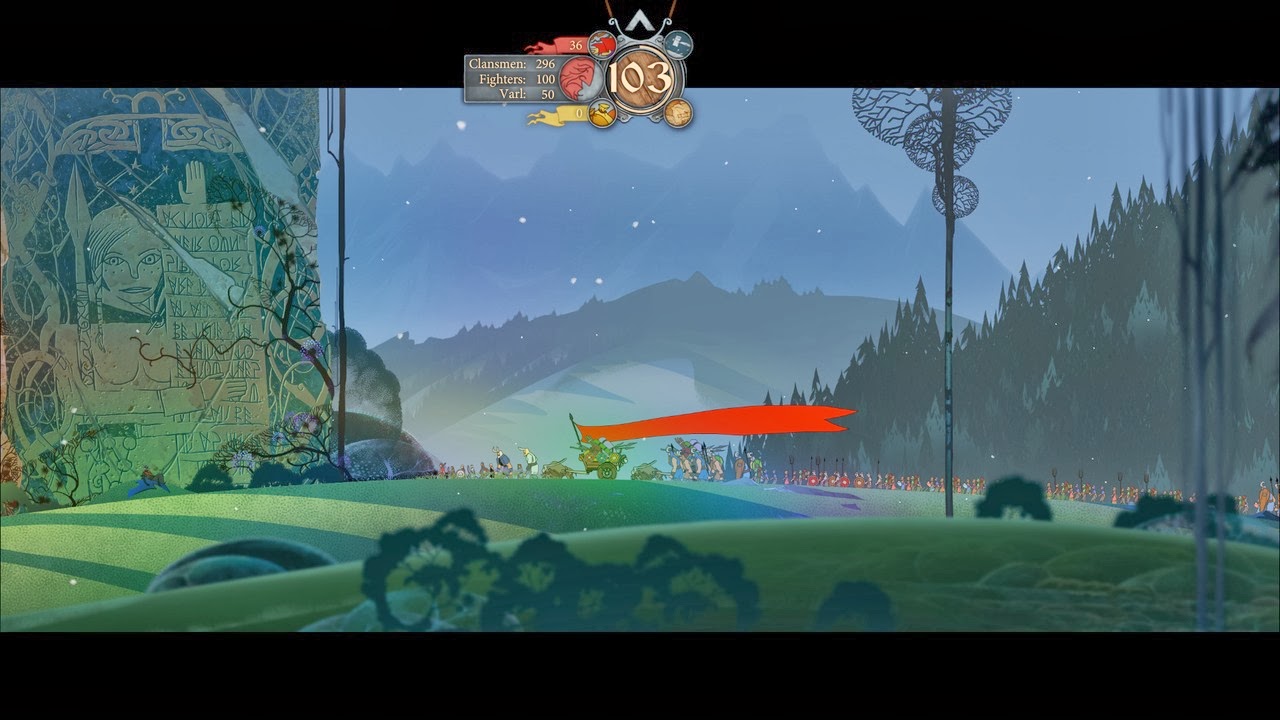 Once battle is joined, the view shifts to an isometric battlefield where you can order your heroes to move, engage in combat or use special abilities, a little bit like XCOM but with no cover mechanics. The number of abilities is gratifyingly large and varied, and even basic combat is made more tactical by the presence of armour mechanics where you have to break enemy armour before you can inflict significant wounds. The game also intriguingly combines hit points and strength: by damaging an enemy, you also make them weaker and prevent them from inflicting as much damage on you. Two fairly basic ideas, but they make a big difference on how combat operates. Particularly gratifying is the way it makes combat more unpredictable, with an apparently invincible enemy suddenly being neutralised by inflicting moderate amounts of damage to make his attacks less lethal.

The storyline is - eventually - fascinating, although it's perhaps presented a little too obtusely. The game starts in media res and the game makes few attempts to explain what's happening. Then, just as you start to get a handle on things, the story switches POV to a whole bunch of other people a thousand miles away, and then you have to adapt to them. The two caravans are rather different in tone, with the first one consisting mostly of varl who are being extremely tough in combat, whilst the second consists mostly of civilians and is more dependent on archers, missile attacks and avoiding damage.

The story, which takes on Malazan levels of confusion before becoming clearer, ends up being quite gripping. There are twists and turns, including a bloody betrayal that even George R.R. Martin might think is a bit much. Depending on your story choices, you may not encounter the same situations with events unfolding differently depending on what you do. 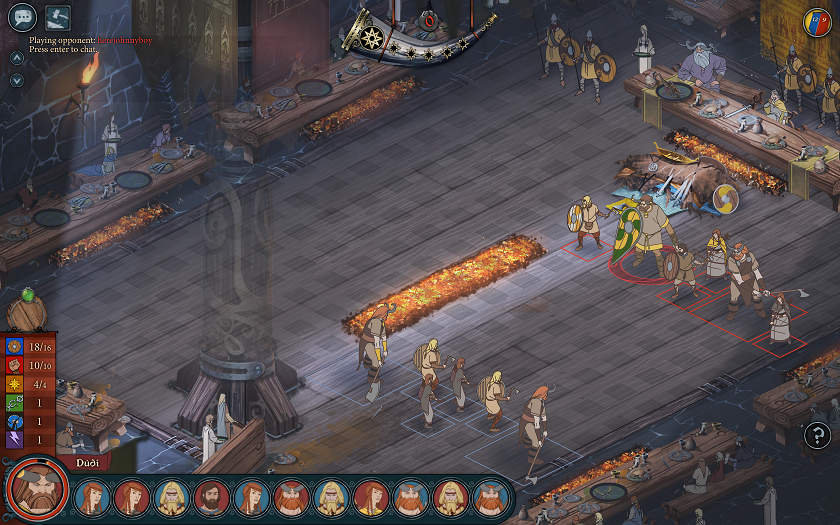 The biggest talking point about the game is the artwork, which is fantastic. It's deliberately meant to evoke Disney movies from the middle of the last century with clear, distinctive lines and colours. The minimalist musical score by Austin Wintory (the same guy who did Journey) is also extraordinary, with just the right about of brooding atmosphere. The game's limited budget means no voice-overs (aside from infrequent appearances by a narrator) but the writing is strong enough that this does not matter.

On the negative side of things, The Banner Saga could perhaps do with a bit more variety in combat. There's a very small number of enemy types and constantly fighting those few types soon gets repetitive. The game's save system is also poor, with it often being unclear if the game saved the last time you quit or three tough battles before that. Finally, the game's Renown system really doesn't make sense (how does Renown work simultaneously as reputation, currency and skill points?) and massively limits how you proceed through the game. Whilst it's good that the game is quite harsh in places and you can get into unwinnable situations, it's frustrating when such situations arise not from your own actions but from questionable design decisions.

The Banner Saga (****) is a beautiful, atmospheric and refreshingly different kind of game, a tactical, turn-based RPG by way of a strategy game, mixing genres and styles from everything from XCOM and Battlestar Galactica to roguelike games and steampunk. Some iffy design decisions eventually become frustrating, but this is still very much a game worth playing. It is available from Steam now.
Posted by Adam Whitehead at 20:01

Email ThisBlogThis!Share to TwitterShare to FacebookShare to Pinterest
Labels: stoic, the banner saga