Brynd Lathraea has saved the city of Villiren from the invading Okun. Jamur Rika has now made the city her new capital and declared herself Empress, but Brynd is concerned over her fragile mental state. As the invaders grow in strength and numbers, Brynd makes an important alliance, but one that may cost him the support of the people. 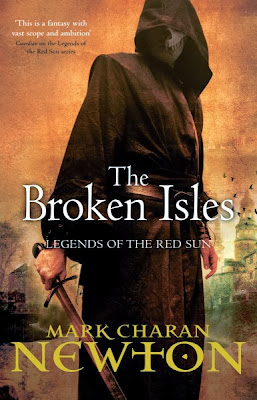 The Broken Isles is the fourth and concluding novel in the Legends of the Red Sun series which began way back in 2009 with Nights of Villjamur. Through that novel and its two sequels, City of Ruin and The Book of Transformations, Newton painted a convincing picture of a world slipping into an ice age, riven by internal conflict and external threats. It's definitely been one of the most interesting of recent fantasy series, fusing elements of traditional epic fantasy with the New Weird movement and with the Dying Earth subgenre.

The structure of the series to date has been to use a different main cast in each book, sometimes comprising new characters and sometimes promoting former minor, supporting characters to main character status. It's worked well in previous novels, but in The Broken Isles Newton has to combine all of these characters into one larger cast operating in multiple locations to address all of the numerous plot strands he's been developing. Unfortunately, this does not work very well. The Broken Isles is the big, epic finale to a fantasy saga but has the same page count as the novels that came before it (just under 400 pages in paperback). Suddenly having to handle a greatly enlarged cast means that each character now gets rather short shrift in terms of development and attention.

This problem extends to the plot and structure: the book opens with a chain of fleeing refugees who have to be saved from pursuit, whilst Brynd has to secure control of Villiren and deal with the increasingly bizarre Empress and secure an alliance with another faction of the alien forces and deal with cultists intent on resurrecting an ancient monster and deal with a racist crime lord determined to take control of the city and force foreigners out and save the entire Boreal Archipelago from annihilation at the hands of the Okun and their masters. The book's slim page count can't deal with the weight of all this at all.

The result is that The Broken Isles feels like a tremendously detailed outline for a much longer and, frankly, much better novel. Scenes, even momentous ones, are short and perfunctory. There are no subtle moments of revelation, with info-dumping and exposition being the order of the day to clear up mysteries that have been around from the start of the series. Newton's prose, which has been enjoyable and offbeat since the first novel, is here reduced to the most simple and prosaic. The pacing tends towards the staccato, with scenes feeling almost disconnected from events around them. Things happen but they have no weight to them.

This is a monumental shame, as Newton's ideas remain as fascinating as ever. The Mourning Wasp (developed with China Mieville) is a terrific creation. The idea of turning the invaders' own technology against them is a good one (the sort-of cultist storyline dealing with this is actually one of the better-handled ones in the book). The invading flying city is appropriately threatening. Frater Mercury's solution to the invading aliens is over-simplistic, but also appropriate to his character. But these moments are few and far between.

The Broken Isles (**) is an exercise in frustration. Mark Charan Newton is a talented writer, but this novel feels so compromised by word counts that most of the enjoyment has been leeched out of it, despite flashes of imaginative power. A tremendously disappointing conclusion to one of the more interesting fantasy series of recent times (and, alongside God of Clocks and The Born Queen, furthers something of a trend for Tor UK series to have disappointing finales). The novel is available now in the UK and USA.
Posted by Adam Whitehead at 10:51

Email ThisBlogThis!Share to TwitterShare to FacebookShare to Pinterest
Labels: legends of the red sun, mark charan newton, the broken isles

That looks like the publisher puts time and wordcount pressure on the authors - the sad fate of those not as popular as Rothfuss, Lynch et.al. I wasn't sure in case of Keyes whether it was the publisher or Keyes himself wanting to get that baby out since his media tie in stuff is likely much better paid, but if there are more examples, I suspect it's Tor UK. Or likely the world of big house publishing overall.

Longer stories grow easily into More Books Than Planned; I see that in my own writing (I got two single volume NiPs that will probably turn into duologies, but luckily(?) no publisher to breathe down my neck). :-) Tad Williams keeps writing 4-book trilogies and we all know what happened with ASOIAF. So a planned 4 book series may well end up 5 books and it's a pity if the publisher insists in keeping it at 4.

As I wrote in my review, I was also very disappointed by this last book in Newton's great series. However, I'm not certain that the fault is solely a rushed schedule or a wordcount issue. I felt since the Book of Transformation that Newton had lost some flame for his Legend of the Red Sun saga. I may be completely wrong but I think that he may had more interest in his new series...