Miles Vorkosigan visits Eta Ceta, the homeworld and capital of the empire that formerly ruled his own planet, as a diplomatic envoy. What starts off as a fairly routine job - representing his world at a state funeral - escalates into a clandestine battle of wits between Miles and an unknown Cetagandan enemy who is trying to frame Barrayar for a crime and reignite hostilities between their two empires. Miles has to find and defeat this foe without offending his hosts or shaming his own world. 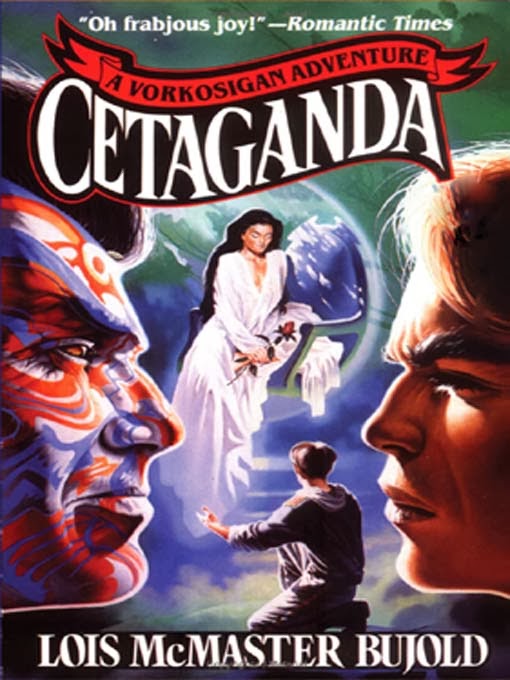 Cetaganda is the fifth novel (by chronology) in The Vorkosigan Saga and the shortest to date, clocking in at only around 250 pages. It's a slight story, and feels more like an expanded short story than a fully-fleshed out novel.

On the successful side of things, Bujold brings her trademark wit and readability to the story. To use a lazy reviewing tactic, if you liked the previous books in this series, you'll probably like this one as well. However, Bujold is arguably unsuccessful in really making the Cetagandans (here making their first on-page appearance after many frequent mentions) an impressive, convincing society. The Cetagandan Empire is ruled under a bewildering array of rules relating to male/female relations, genetic engineering and social function, which is all fine until you realise it would be too easy to topple the whole thing if enough people decided they didn't want to play along (as indeed almost happens in this novel).

More damaging is the fact that Bujold does not complicate Miles's story enough. Every time something bad happens, Miles immediately shifts it to his advantage, and he is never on the back foot for more than a paragraph or two. With a long series based around one character you have to constantly be on the look-out for that character becoming too infallible or invulnerable, and that nearly happens to Miles here.

Still, even a sub-par Vorkosigan novel remains a fun, if lightweight, read. Cetaganda (***½) is available now in the UK and USA as part of the Miles, Mystery and Mayhem omnibus.
Posted by Adam Whitehead at 09:55