British TV station Dave has confirmed that the eleventh season of Red Dwarf will start airing in the UK on Thursday 22 September at 9pm. 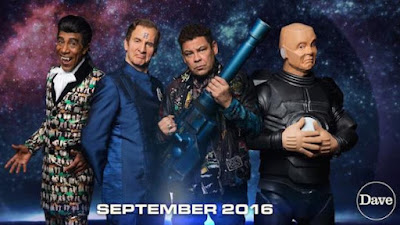 Red Dwarf, created by British writers Rob Grant and Doug Naylor, is the longest-running British sitcom overall and the longest-running science fiction sitcom in history. It tells the story of Dave Lister, the last human being alive in the universe after he is put into suspended animation for three million years. His only company is a humanoid creature which evolved from his pet cat, a neurotic mechanoid and the holographic recreation of his officious and pedantic former boss.

Its first episode aired on 15 February 1988 and it aired six seasons between then and 1993. Following a hiatus caused by the break-up of the Grant-Naylor writing partnership, Naylor regrouped to write two additional seasons, which aired in 1997 and 1999. Naylor would spend most of the next decade trying to get a Red Dwarf feature film off the ground before returning with a short mini-series in 2009. Although critically derided, it proved extremely popular on the Dave cable channel. A tenth season aired in 2012 and was surprisingly accomplished, being the best season since at least the sixth.

Hopefully Season 11 continues this return to form. Season 12, surprisingly, has actually already been filmed with production concluding recently. Season 12 will air in 2017, also on Dave.
Posted by Adam Whitehead at 16:24

Hmm, I'm going to have to catch up with season 10. After the Back-to-Earth miniseries I really wasn't interested in further tarnishing my memories of the first few seasons.

Great, dident even know they had started production on 11, hearing 12 is already filmed is just awesome.