Shadow Tactics: Blades of the Shogun, my favourite game of last year, is part of a Steam sale on a 33% discount. The game has also had its free demo (remember those?) expanded to the entire first two levels of the game. 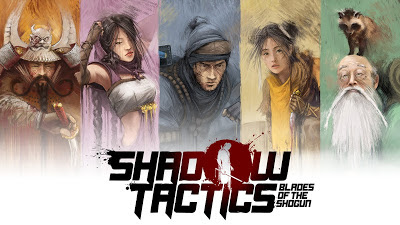 Shadow Tactics is a stealth-focused game where you control five very different characters with complementary skill sets who have to make their way through a civil war in Shogunate Japan, using a mixture of guile, cunning and intelligence to achieve fiendishly hard objectives. The game has a beautiful soundtrack, a vivid art style, some brilliant emergent gameplay moments (my favourite being the 13-year-old girl and a dart trap who turns an ordinary watchtower into a gruesome, corpse-filled abattoir for easily-distracted soldiers), a satisfying storyline and five well-defined characters with their own personalities.

This game came out of nowhere from a very small developer and was absolutely outstanding. Please buy this game and tell all your friends so the developers will get to make more!
Posted by Adam Whitehead at 21:42