The sensates are in danger. The sinister Whispers has formed an unwanted, hideously invasive mental connection with Will and is stalking his every move, hoping he betrays his location. However, Will is likewise stalking Whispers, determined to defeat this enemy before he can kill anyone else. The rest of the group has to deal with their own problems, but soon find new allies waiting as they make contact with other clusters and discover their numbers are far greater than they could possibly imagine. 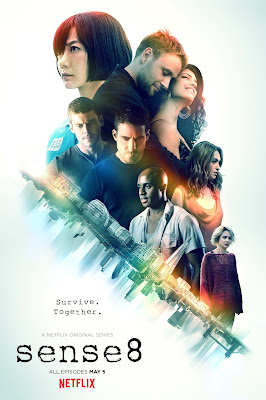 Sense8's first season was a deliberately-paced introduction to eight different, diverse characters hailing from completely different parts of the world, each accompanied by their own set of supporting characters but linked by a shared mental connection. It was excellent, but it was slow and at times risked becoming self-indulgent.

The show employs the same structure that we saw the first time around, with each of the eight sensates having their own story to follow as well as being unified by the ever-growing threat of Whispers and the organisation he fronts. The biggest difference is that we now know all eight characters and they now know all each other. When confronted by individual danger they can call upon the entire team's help rather than just one or two as with last season and this definitely massively ups the stakes in both emotional and dramatic terms. Seeing the team join forces to expose the identity of one of Whispers' superiors based on a glimpse of his office, like a telepathic edition of CSI, is a great idea. It's also good to see slightly under-served characters having more to contribute: Kala gets to use her scientific knowledge to great effect in several scenes (including working out how to blow up a van during a gunfight whilst Wolfgang and Will are arguing about whether to flank or fall back).

This is also the year that the show ups the stakes in action and visual terms. Season 1 had some excellent moments (rocket launcher, anyone?) but Season 2 takes it up to the next level. Lana Wachowski - flying solo for the first time as a director (Lily took a break this year) - revisits the Matrix lobby scene with a shoot-out in a restaurant between two sensates (complete with their own cluster, meaning sixteen skillsets being showcased together) which is ridiculously good fun. Even better is a high-speed car chase through the streets of Seoul - complete with vehicles flipping through the air and crashing for real - which is jaw-dropping and looks as good as any feature film. The production values, if anything, step up a notch in line with the confidence of the directors and returning co-writer J. Michael Straczynski.

But the show's characters remain the core focus of the show. As well as the central cluster and their returning allies (including a still-excellent Freema Agyeman, acting on an altogether different level to her stint on Doctor Who) there are new characters, including a wonderfully batty turn by ex-Doctor Who, ex-Radagast the Brown Sylvester McCoy as an older Scottish sensate and Valeria Bilello as a sensate from another cluster who works as an enforcer and fixer for a shady German businessman. But the core cast remains at the centre of attention, including newcomer Toby Onwunmere who is given the difficult task of replacing he likeable and energetic Aml Ameen as Capheus. Onwunmere is a different kind of actor, less funny and more intense, and the adjustment is a bit rough (not helped by a couple of comments lampshading the change) but by the end of the season he has managed to make the role his own. The rest of the cast are on top form, with Jamie Clayton in particular improving from the first season where her massive, hacker-driven infodumps of exposition could be clunky.

The second season also spends some time developing the backstory of the sensates - no Lost-style teasings here, the sensates have pretty mundane origins and well-established rules on how they operate - and how many clusters there are and how they operate. "Our" cluster, it turns out, is pretty lucky in having so many complimentary skills. We also learn that just being a sensate isn't enough to make you a good person and that some sensates are downright nasty. There's more to come on this front but the sheer size of the sensate population means that the writers have a lot of material to play with in coming seasons.

Weaknesses? Well, there are some very jarring tonal moments in Season 2 which don't quite connect with the rest of the story, some bum lines of dialogue and occasional over-indulgence in positivity (as refreshing as this is from shows like Game of Thrones and The Walking Dead almost making a fetish out of grisly cynicism). A scene where Nomi and Nita form a secret hackers' alliance with Anonymous, who it turns out know all about the sensates and have been helping protect them (no, seriously), feels like it was biked in by a totally different writer who'd done three minutes Internet research on the organisation before he wrote it. Also, and this was exacerbated by watching this show immediately after Mr. Robot, the hacking scenes in general are pretty unconvincing. Overall, though, this year emerges as slightly stronger than its predecessor season, more confident, much better-paced and with more of a sense of purpose and energy.

Season 2 ends on a titanic cliffhanger, which is a sign of huge confidence from the writers, producers and Netflix themselves. Sense8 is massively expensive, probably the most expensive show on the Netflix roster apart from the in-production Altered Carbon, and it hasn't quite hit the same level of success in the USA as the likes of Stranger Things and Daredevil. However, it's a lot more popular in many other parts of the world (such as Brazil, which gets its own huge shout-out in an episode set in Sao Paolo) and a third season seems pretty likely at this point. Hopefully Netflix won't tease us for quite so long like they did last time and also won't make us wait two years for the next full season.

Sense8's second season (****½) is wacky, bizarre, over-brimming with optimism and also deeply rooted in interesting and engaging characters, with an interesting backstory and some of the greatest action scenes ever filmed for television. It is available on Netflix now.
Posted by Adam Whitehead at 15:49