BBC confirms it is planning five more seasons of DOCTOR WHO

The BBC has signed a new deal with Chinese broadcaster SMG, giving them the rights to broadcast and stream the show's entire history from 1963 to the present day, including five more seasons of the show after this one. 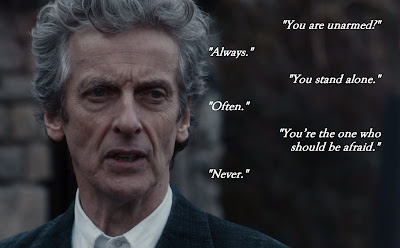 This is reassuring news as the fate of Doctor Who has, once again, been under discussion recently. The currently-airing 36th season (the 10th since its return in 2005) has attracted some relatively low overnight ratings of just 3.5 million, although the consolidated ratings (including those watching time-shifted and recorded versions) are closer to 6 million, even before iPlayer viewings are taken into account. The show also continues to sell very well overseas for BBC Enterprises, and after the effective demise of the most popular version of Top Gear, is the BBC's most profitable and successful show, mainly down to Doctor Who's relatively tiny budget.

The show has already been formally renewed for its 37th/11th season, which will air next year with new showrunner Chris Chibnall in charge, with a new Doctor and a potentially a new companion to introduce. This news confirms that the BBC see a long future for the show and are increasingly disregarding overnight ratings as irrelevant to gauging the overall performance of its shows.
Posted by Adam Whitehead at 11:42

I wouldn't have expected cancellation, given how popular Doctor Who's international broadcasting has become, and how lucrative the merchandising must be for the BBC, but it's nice to have some confirmation.