JV Jones update on ENDLORDS and SWORD OF SHADOWS

J.V. Jones has reported on Patreon the status of her current writing projects, confirming that work is underway on Endlords, the fifth Sword of Shadows novel. 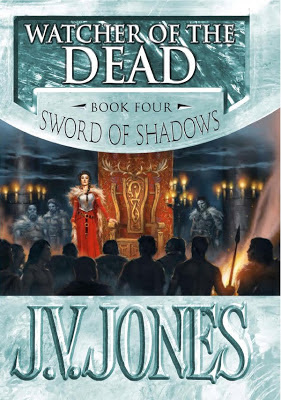 The Sword of Shadows series currently consists of A Cavern of Black Ice (1999), A Fortress of Grey Ice (2002), A Sword from Red Ice (2007) and Watcher of the Dead (2010). Work on Endlords began in 2010 but stalled after a few chapters as the author's life entered a tumultuous phase which was only recently resolved. Jones has resumed work on the novel, but cautions that after such a long break she is approaching the project slowly to get back into the same writing space as before and deliver a continuation of the same quality.

Writers are always trying to recreate what we see in our imagination, whether it's a landscape, an emotion, a person, a relationship. We're chasing that almost unattainable perfection that exists as a possibility in our heads. Some writers can manage this right-off-the-block with their very first novel or short story. They are extremely talented and lucky. It takes most of us years of practice to perfectly command all the tools we need to nail a scene.


I wrote over two million words to get there.


Now I have to see if I can do it all over again.


Jones is also serialising another project, Sorry Jones, on her Patreon as part of a reward scheme for backers. Endlords is still under contract to Tor (in the USA) and Orbit (in the UK) and will be published by them, so Sorry Jones is a way of getting new fiction out to readers sooner and help with funding.
Posted by Adam Whitehead at 19:29

Email ThisBlogThis!Share to TwitterShare to FacebookShare to Pinterest
Labels: endlords, j.v. jones, news, patreon, the sword of shadows, watcher of the dead

It's good to know that she's resumed work on the book. I don't have a lot of patience for the modern trend of long delays with current authors, but J. V. Jones is an exception. While it doesn't sound as though it will be soon, I will be ready for it whenever it comes. Thanks for the update.

she lost me when she went offline for years, I can't be bothered anymore.

Just need a prologue to get us all in the mood again. Please.

It'll probably be a decade or more before we see it, if at all. Here is her most recent response:

I understand people want to know how ENDLORDS is going. My answer is this: I haven’t written anything in 5 years. At this point any writing is better than no writing. There is no trickery or bait and switch. Before I can write ENDLORDS, I need to be sure I can write. I also have to be sure I have the discipline and commitment necessary to bring both a book and a series to completion.

I can't wait, because I want to see how everything works out for Raif, Ash, Effie, Raina, and Angus.

Endlords! Even the title alone leaves me thirsting.

Wish I hadn't started reading the series again. Methinks I wont be around to see the next book.

I'm just on the brink of burning the 4 other books. Perhaps let another author finish the series. At least then we will have close even if it stinks it will have an end.

I've been absolutely salivating at the bit for this book ever since I finished Watcher of the Dead (and realised that the series STILL wasn't finished)... I cannot wait for this book to come out, and it has upset me that it's taken so long, but I've heard bits and bobs about what happened to Jones, so I've been willing to wait on it and hope that this really is the finale of the series, as I don't think I could bear waiting another 3+ years afterwards for a 6th book!

When the first book came out I realized that it was definitely a cut above many others..just a really good read...the long spacing between the further books has been hard to take but I guess I would rather have read it than not...for me its basically on hold atm...waiting for another volume or 2 ..I would definitely rather wait and reread the entire series with 1 or 2 books at the end that really smash it out...then get something half baked...jv jonesjust take your time and do your best..I think with most of my favourites they were written long ago so i just picked them up and read them all at once..like people will be able to do down the track with stuff written now....we are just the frustrated few that have to wait thru the creation process...

Ever since reading "The Barbed Coil" (a wonderful stand-alone novel) 20 or more years ago, I had a good opinion of J V Jones. I thought "The Baker's Boy" looked fascinating but put off reading it for years. Finally, in the last 12 months, I have indulged myself by reading the whole "The Book of Words" series followed by all 4 books of "The Sword of Shadows", having just completed "Watcher of the Dead" this morning. So, I've enjoyed more or less the experience described on 6 February 2018 by "Anonymous" above. I was quite disappointed to discover the series was incomplete but hope was restored when I came upon the information on this site! I am willing to be patient for the sake of a fitting conclusion to the series by this excellent writer, so I wish J V Jones success in this as in all her endeavours. It will be fascinating to see how all the strands are brought together, I notice Baralis seemed to have been absent in Book 4 ....

No disrespect, but from the rate at which the storyline is progressing across the first 4 books, I highly doubt the series can be concluded in just 1 additional sequel.

Hence why there will be 6 books in total.

Had hoped when Julie said she was 'back' that Endlords would have been published by now. It has been a fantastic series - and up with the best- but, having read the first four twice now I have all but given up on this book being finished. And if it was to go to six I will give up. But Julie would appear to have reasons for not completing the series so far, whereas Martin has been so busy making cash from the TV series, plus his book of maps and a prequel that it is insulting to all his
Readers.So sad as series is also brilliant. Andy B

I re-read the whole 4 book's again last year mainly out of frustration for the next instalment.. Not sure how long I can be bothered waiting.. Any longer I'm afraid my memory of the series will fade and possibly the author as well..

I too would dearly like to see the series finished as the four we have are brilliant. So different than anything else in the area, no elves or such. What I feel is, it would be selfish of me to complain too much about the lack of an ending as it appears obvious the lady has had a traumatic experience in her life, is attempting to get back on track and I can only wish her well and hope the book/s will eventually see the light of day.

I must say that I would like to see another book in the series.

Don't really even know why I have persisted in reading the series as I think as a writer she could be better, too much unnecessary detail! 500 pages that should be 220. Having said that her writing is like chewing gum, an automatic reaction and especially in Covid 19 times it really helps pass the time.

I have in the last few weeks completely re read all of her published novels ( don't know why? I must be crazy) and am left with one elephant in the room question, why didn't she add another book to the Book Of Words series? it was really all down hill from that first trilogy.

But not to finish up on a downer, Go J V Jones give us some more of your vision.

I think that I might know how it is with trying to write when your heart just isn't into it. I began writing a sci-fi novel entitled Divine Heritage. I wrote enough to prove that I have the skill set that goes with the job. I just don't have the stick-to-it-ness to keep on doing it.

Here, something to read, but be warned that it ends long before the story is finished and you might end up getting frustrated again.