Breq, once a superintelligent AI controlling a vast starship, is now a reluctant agent of Anaander Mianaai, the ruler of the Radch. Mianaai inhabits thousands of different bodies scattered across human space, but is now suffering from disassociation: two distinct factions have arisen in her multiplicity and are now waging war on one another. Aligned with one faction against the other, Breq is ordered to the remote planet Athoek and take steps to secure it against the opposition. 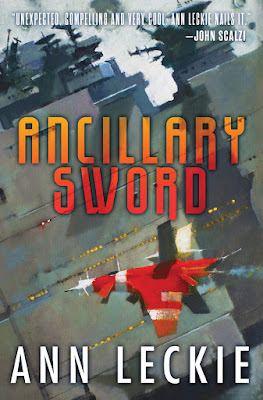 Ancillary Justice was released in 2013 and won the Hugo, Nebula and Arthur C. Clarke awards the following year. A fine space opera novel which contained thematic musings on identity, consciousness and pre-existing biases, it was a striking debut, if one that was slightly overrated.

Being a success, of course the novel turned out to be the start of a trilogy. This is where things start to go wrong for Ancillary Sword. The Imperial Radch trilogy is what can be called a "fake trilogy", where Part 1 is self-contained (to some extent) to avoid too many unresolved plotlines if sales tank, whilst the remaining two parts form a much more closely-linked duology. The original Star Wars trilogy is a good example of that, and it's a reasonably common set-up in science fiction and fantasy which can work quite well (and arguably is better than "proper" trilogies with a single big story, where often the middle book feels surplus to requirements). However, it doesn't really work with Ancillary Sword.

This is a book which has very bizarre pacing. The entire novel, which is only 340 pages long in paperback, is laid back, chilled out, almost languorous. Breq travels on her starship to Athoek and meets lots of people and is nice to them, whilst carrying out observations of them from her unique perspective (a starship AI living in a single human body). The other characters are a mixture of interesting and bland, but the novel stubbornly refuses to engage in anything really approaching a plot or giving them anything interesting to do. A representative of an overwhelmingly powerful alien race is murdered, but this has no consequence (in this novel anyway). There's a lot of politicking and capital-building, both by Breq and her subordinates, and some of this is addressed in the novel but a lot of it isn't. At one point we learn of a mysterious "ghost gate" leading to an unknown star system where Breq suspects something is going on. She resolutely fails to follow up on this lead.

Ancillary Sword, it soon turns out, is almost nothing but set-up and pipe-laying for Ancillary Mercy, the third and concluding volume in the series. This isn't necessarily a bad thing, but it is an issue when the book denudes itself of its own identity and storyline to benefit the later book in the series.

What the book does do quite well is character development, with Leckie also cleverly inverting the usual cliches of "AI wanting to be human" stories by having an AI become human and resolutely dislike the experience. By the end of the book Breq knows where she stands with regards to the government of Athoek and the administrators of the space station above it. The novel also makes some nods in the direction of themes such as colonialism, but treats the subject simplistically and superficially: no-one on Athoek but Breq has ever had the idea of treating the labourers fairly or even just enforcing the law on treating subject races well, apparently.

This is a slow-burning, SF-lite novel which feels like it is trying very hard to be a Lois McMaster Bujold book (who does this kind of comedy-of-manners, character-rooted story which holds back on violence and explosions with considerably less hype) but is undercut by also lacking the story and thematic elements that Bujold would include in her work effortlessly. If Ancillary Sword is anything, it's certainly not effortless: this is a turgidly-paced novel that took me five weeks to get through despite its modest length.

Still, Ancillary Sword (**½) is a desperately slow and badly-paced novel rescued by some effective characterisation and ends with some plot developments that leave things in an intriguing place for Ancillary Mercy to resolve. How well it does so remains to be seen. The novel is available now in the UK and USA.
Posted by Adam Whitehead at 14:40