Season 2 of SENSE8 arrives on Netflix

Season 2 of Sense8 has hit Netflix and should now be available to viewers worldwide. 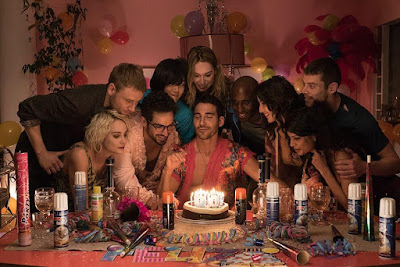 The first season of Sense8 remains, easily, the most interesting thing Netflix has done (maybe not quite the best, but certainly the most original), a tale of empathy and how people are defined and enhanced by their shared humanity. The Christmas special - which was really the first two episodes of Season 2 combined for an event episode of television - was likewise accomplished and intriguing.

The second season is up on Netflix right now.
Posted by Adam Whitehead at 14:24

I only made it through the first 4 episodes of the first season. I'll admit it was innovative, but it also came across to me more as a vanity project than an attempt to create compelling entertainment with a coherent narrative. At the point I quit, I cared about very few of the characters and assumed we were being lead on a "Lost" style journey that wouldn't have much of a payoff. Based on what you've seen of the second season (or even the rest of the first), should I give it another chance?

I would say that Season 1 takes off only very much after Episode 4. I'd also say that Straczynski (who wrote Babylon 5, probably still the last word in long-form, arc storytelling on TV) was very much aware of the foibles of LOST and made major efforts to avoid the same issues they encountered.

I haven't seen Season 2 yet (beyond the first two episodes released at Christmas) so I don't know (yet) how they've handled that.