It's been known for a while that HBO have been developing ideas for a Game of Thrones spin-off series so they can continue to make substantial amounts of money explore the rich and diverse world created by George R.R. Martin. In a bizarre twist, they have confirmed that they are developing no less than four potential spin-off projects, each from a different writer, so they can pick the one (or two) they like best, like a slightly odd reality show. 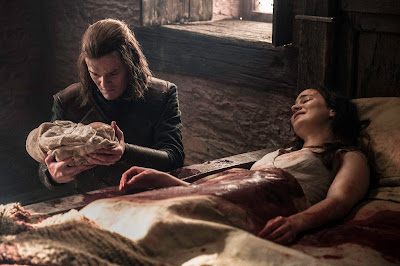 Borenstein is heavily involved in Legendary's new "Monsterverse", writing the scripts for Godzilla and Kong: Skull Island. He is feted in Hollywood writing circles for Jimi, an unproduced biopic about Jimi Hendrix. He is currently working on the Godzilla sequel, King of the Monsters.

Helgeland is an Academy Award-winner, noted for his work on L.A. Confidential and Mystic River. Intriguingly, his scripts include the Heath Ledger 2001 medieval musical A Knight's Tale, which bears uncanny similarities with George R.R. Martin's Song of Ice and Fire prequel The Hedge Knight (1998).

Jane Goldman is an experienced SFF screen writer, having written the scripts for Stardust, Kick-Ass, X-Men: First Class, The Woman in Black, Miss Peregrine's Home for Peculiar Children and both Kingsman movies. Goldman has a high hit rate and is the only one of the four writers to be based in the UK, presumably where the spin-offs will continue to be filmed (if they require the same scenery).

Carly Wray has worked as a writer and producer on Mad Men, Constantine, The Bastard Executioner, The Leftovers, Mindhunter and Westworld. Her work on The Leftovers and Westworld gives her the most experience of having previously worked with HBO.

Borenstein and Helgeland are developing ideas independently, whilst Goldman and Wray are developing their scripts with input from George R.R. Martin. Game of Thrones producers David Benioff and D.B. Weiss will be attached as producers and advisors, but will not be directly involved since they are starting work on the eighth and final season of Thrones for next year and will then be developing a feature film adaptation of the novel Dirty White Boys for Fox.

HBO are apparently not set in any final decisions about the spin-off project: they may like all four ideas and commission all of them, or dislike all of them and go back to the drawing board. It's worth noting at this point that George R.R. Martin retains the rights to any other material set in Westeros, so the writers will have to also win his approval as well as HBO's to move forwards.

The most likely spin-off project is either a continuing series or series of films based on Martin's Dunk and Egg novellas (starting with The Hedge Knight). There is already material available to be adapted and the stories have a (somewhat) lighter, more self-contained narrative that will make them, in theory, easier to sell to audiences. However, only three of a potential twelve stories in the series have been written. It could be, with the main series occupying his time for the next few years (at least), Martin has found the TV option as an alternate way of getting these stories out through other writers.

HBO would likely be most interested in a prequel series based on Robert's Rebellion, featuring younger actors playing key Game of Thrones roles. Indeed, they already have Robert Aramayo and Aisling Franciosi cast as Eddard and Lyanna Stark from the main series (although a big-budget, ongoing series may feature some recasting). However, Martin has always been somewhat opposed to telling this story in detail, believing it would only be "filling in the blanks" as the key parts of the story have already been revealed in A Song of Ice and Fire and Game of Thrones themselves. HBO may attempt to persuade Martin of the merits of the project by burying his entire house and indeed city in dump trucks of money citing its artistic and thematic potential.

More daunting is the idea of doing a story based on the Dance of Dragons, using Martin's short stories The Rogue Prince and The Princess and the Queen, as well as the history outlined in The World of Ice and Fire (not to mention a much more detailed account of the conflict, which Martin has written for a future spin-off project called Fire and Blood). This would probably need to be a feature film or a trilogy, and with its focus on massive dragons and aerial combat, might be a good fit for Borenstein (whose upcoming workload is also quite full, making it less likely he would commit to a TV show for several years but could work on a movie project).

It's very early in the process, but it's quite likely that HBO would like something ready to air in late 2019 or early 2020, after Game of Thrones' final episode airs somewhere in the late summer of 2018.
Posted by Adam Whitehead at 21:19

Oh! I'd seen Helgeland advertised as "(Legend)", which didn't fill me with confidence. Didn't realise he wrote L.A Confidential and A Knight's Tale - two of my favourite films! (albeit very different in tone from one another).

On the other hand, they were in 1997 and 2001, and pretty much everything he's done since has... failed to inspire confidence. Mystic River underwhelmed me. The Sin Eater met with general derision. The terrible and unnecessary remake of Pelham-123? Terrible and unnecessary. 'Robin Hood' didn't really work, and looks to have done for his writing career what 'The Sin Eater' did for his once-promising directorial career (his only screenplays produced since then are ones he directed himself, and only 2 in 7 years).

Then again, given that he wrote A Knight's Tale, The Sin Eater AND Robin Hood (and directed 2 of them), he clearly at least has some affection for the genre, which can go a long way in making the product enjoyable.


My bigger concern is that I'm not sure how many people will find any such spinoff really necessary. All that historical stuff... feels like it would play like appendices, too similar in style to, but less 'important' than, the "main" series. Dunk and Egg could work by taking a lighter approach, but would probably be better as a film than a series. And since GOT is so po-faced and dour, there's less room for a fun spinoff. But... you never know.

I don't know what to think of a potential adaptation of the Dunk & Egg stories at this stage. If they get adapted in the near future it might be another series of stories whose conclusion will first be told on screen. :-(