CBS has released a trailer for their upcoming new series, Star Trek: Discovery. 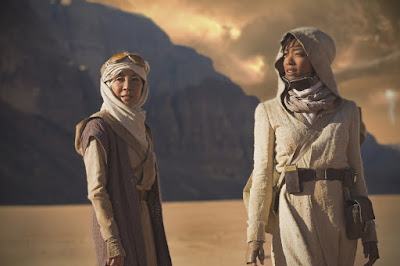 Set approximately ten years before the events of the original series, the show will follow the adventures of the USS Discovery as it engages with a major new threat to the Federation.

The new show will air on CBS All Access in the United States and on Netflix in most of the rest of the world. No air date has been set, but this autumn seems to be the most likely date. However, CBS has revealed that they have upped their episode order for the series from 13 to 15, in a welcome display of confidence in the project.

What do I think of the trailer? It's US-only at the moment, so I have no idea. More thoughts when an international version is released.
Posted by Adam Whitehead at 22:03

You can see the trailer in a region-free mirror here:
https://streamable.com/s/pmp54/reercq

In and of itself, seems fine to me.

But a prequel set 10 years before TOS? I have many concerns. Frain speaks like no Vulcan ever (despite similar appearance to Sarek), there's no attempt at stylistic lineage to TOS), Klingons totally different from any established appearance.

It basically hits me the same way Star Trek: Beyond did- A decent SciFi movie, but so tenuous in it's connection to the core of Star Trek.

I like it. It has a very Mass Effect feel, which to me at least is a good thing.

About (dis)connect with establish Trek stylistic conventions - sometimes change is a good thing. You can only use the same settings and art style so many times before it gets tired. Probably one of the main reasons that Trek fell out of favour on TV. A reimagining of the Trek style can only be a good thing - as long as the runners don't forget that a Trek show lives and dies on the strenght of its characters, its stories and plots, and most of all, its ideas.