George R.R. Martin has provided an update on the status of the Game of Thrones spin-off projects that HBO is developing. 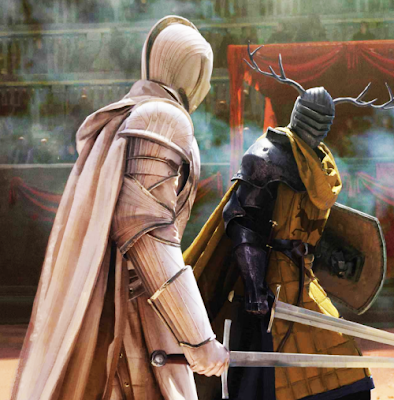 Martin confirms that HBO is looking at four potential scripts and has been developing ideas with them since last August. He also says that this has now expanded to five scripts, with the fifth writer being someone who knows A Song of Ice and Fire better than anyone except himself and the Westeros.org admins (which makes me wonder - and this is pure speculation - if it's Daniel Abraham, who writes the ASoIaF comic books and of course has recent TV experience from The Expanse, or maybe Bryan Cogman who currently works on GoT).

Martin has ruled out a Robert's Rebellion TV show, confirming that he has no interest in "joining up the dots" of the major events of the war, all of which will be explained in the books or GoT itself. There will also not be a Dunk & Egg TV show, as Martin wants to write at least a few more of the stories before pursuing a TV adaptation. All five projects, therefore, are new. He also confirms that all five are prequels taking place some considerable amount of time prior to the novels or existing TV show, and existing characters will not be featured.

Most intriguingly, he suggests that not all of the projects will take place in Westeros, raising the prospect of a series set entirely elsewhere in the world, possibly in the Summer Islands, or Valyria at the height of its power, or exploring the mysterious city of Asshai or the Golden Empire of the Dawn.

At the moment HBO are still developing the scripts and considering the material that has been produced, and will make an announcement on which - if any - they will take forward to the pilot stage and then a series.

Martin confirms that work continues apace on The Winds of Winter, but has not provided a firmer update on the current status of the book.
Posted by Adam Whitehead at 19:36

Doesn't the description of the "fifth mystery writer" seem similar to times when GRRM has talked about Bryan Cogman on his blog (praising his knowledge of the Ice and Fire universe)? Also worth noting that Cogman mentioned having lunch with Martin some days ago.
I admit I hadn't thought about Abraham, who is also a good guess, indeed.

My thoughts on the fifth writer were Daniel Abraham, Bryan Cogman, or Ty Franck (as GRRM's former assistant he'd be pretty familiar with ASOIAF). I'm leaning toward Bryan Cogman because of his TV script writing experience and being part of the current show.

My guess for an Essos series would either be something in Valyria, or Varys-and-Illyrio doing their scheming and stealing in Pentos (which would have the added benefit of building up to Robert's Rebellion, even if they don't show the latter). Valyria would either have to be changed drastically from the whole high fantasy "open towers above channels of lava" vibe it had in the World of Ice and Fire book, or with minimized "outdoor" shots that would require extensive CGI.

If they decided to do something in Westeros, then "no Dunk and Egg" doesn't rule out doing the lead-up to the First Blackfyre Rebellion. That would have a ton of scheming and sexiness, and the battles would mostly happen later in the series when they're on surer footing with more money.

Although come to think of it, all of the spin-offs would probably benefit from being set with a smaller cast in a smaller number of locations.

I liked the bit that he went to meetings, and eatings, with all the writers. That's a lot more enjoyable than sitting at home and writing the damn book.