Netflix has put up a placeholder web page for their new cyberpunk SF show Altered Carbon, based on Richard Morgan's iconic Takeshi Kovacs trilogy of novels. It doesn't contain much info at the moment, but it does confirm that the show will launch in 2018 rather than late this year, as some had previously hoped. 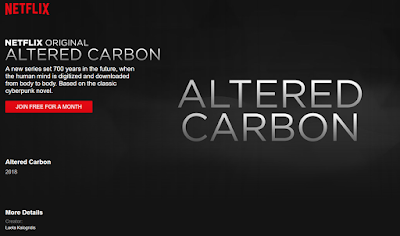 Production on the series started at the end of last year and would appear to be wrapping up sometime around now. Lots of effects work remains ahead - Altered Carbon is reportedly Netflix's most expensive show at $7 million an episode, matching the earlier seasons of Game of Thrones (but only half of the budget of the upcoming seventh season of that series) - before the show hits the screen.
Posted by Adam Whitehead at 21:30

One of my favourite books, I really hope they do it justice.

I love the books! I recommend them to anyone who cares to speak to me. I've been looking forward to this release for a long time now and I am anticipating good things.

Stop jerking us off and show the damn thing already

February 2018, apparently. I'm surprised we haven't seen a trailer yet.

Morgan was very much a victim of his own success with Altered Carbon. The first book is a fantastic mix of sci-fi and old school Raymond Cgandler detective novel and very self contained. The second and third are as if the publishers saw the book win awards, drove a truck full of money upto Morgans house and said "Yes, we'll have more of this please." Leaving him to go "Uh.....sure." and give us two piss poor books in comparison to the first.
I truly hope they do it justice, and if it goes past the first season, they don't adhere to the susequent books.

I am a fan of the books. All three of them.
Looking forward to see how the series will reflect the complicate world and existence of Takeshi Kovacs...

I humbly disagree. I enjoyed the other two books. Though they definitely werent nearly as good as the first, I wouldnt call them "piss poor" and i keep hoping he will write another.

Piss poor is perhaps a tad unfair. In comparison they were far inferior though. Even if the series is as successful as I hope it will be, I doubt we'll see another Kovacs book. An interesting thing that a friend of mine brought up is the content of the book dealing with Muslims. Particularly the conflict on Sharia and his vr interrogation in the chop shop. In todays climate I wonder if Muslims will be replaced with white nationalists, for community cohesion. The first book doesn't go into it all that much, but the subsequent ones do show a particular dislike for Muslims and the stuff they get upto, such as Sarah being stoned to death. It'll be interesting to see where they go with it.