Rebellion, the owners of 2000AD and Judge Dredd Megazine, have joined forces with independent production company IM Global to bring Judge Dredd to television. They are working on a TV show called Mega-City One and are looking to partner with a leading cable or streaming service to bring the Lawman of the Future to the small screen. 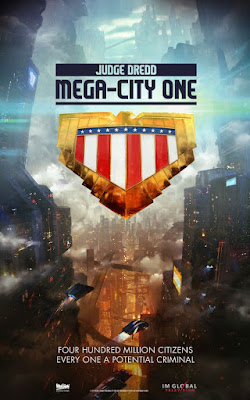 The TV series will focus on a team of Judges, the future lawmen and women of Mega-City One (a vast megalopolis stretching down the Eastern Seaboard of the United States in the early 22nd Century) who are judge, jury and executioner all in one. This is a change to the comics, which focus on Dredd as an individual, although he is backed up by a recurring background cast. It is unclear if Dredd will be part of the team, will lead it, will mentor it or may not even show up.

IM Global produced the 2012 movie Dredd, the positive reaction to which apparently helped pave the way for this deal. This raises hopes that Karl Urban, who starred as Dredd in that movie, will return, given his vocal support for the character and his belief that the character should continue on television.

IM Global has partnered with HBO, Amazon, FX and TNT in the past, raising hopes that this project will find a home on a premium cable or streaming service with access to the large budgets such a project will require.
Posted by Adam Whitehead at 18:51

The 2012 movie is now a cult classic and I could see how the series could work as a TV series but if they want to do this, then Dredd MUST be in the series. I mean what is MegaCity One without Dredd? It just won't work without him.