The Great Ordeal has crossed a thousand leagues in its quest to reach Golgotterath, stronghold of the vile Consult, and to destroy it and the abominations it harbours within. It has braved a horde of a million Sranc, betrayal and, in the shadow of the ancient fortress of Dagliash, a weapon unlike any seen before in the world. Before it lies the Agongorea, an utterly dead land, beyond which lies the fabled Golden Horns of their foe. But the Ordeal is stretched to breaking point, its food gone, its Aspect-Emperor departed on an errand of his own and its greatest heroes missing on dire quests. It falls to King Nersei Proyas to guide the Ordeal over the last leg of its journey...and to a confrontation with history. 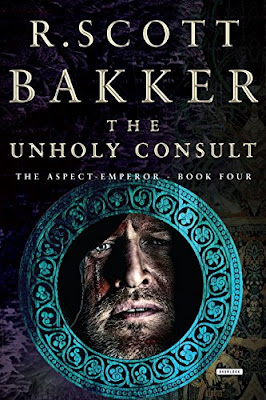 When is the ending not the ending? Thirty years ago, when Scott Bakker first conceived of The Second Apocalypse, he planned to conclude it with the events that, finally, conclude this novel. Some time later he reflected that this might not be the best idea, and drafted a plan for (at least) two further novels to wrap up the saga in a different manner.

Having finished The Unholy Consult - the seventh and most revelatory novel in the series to date - it is hard to say if this was a good idea or not. For those who read this series (so far comprising two sub-series, the Prince of Nothing trilogy and the Aspect-Emperor quartet) for the warring philosophies, SF ideas such as genetic engineering and quantum theory seen through an epic fantasy prism and the way it inverts so many fantasy tropes to the point where they unhinge, I suspect they would have seen nothing wrong with Bakker dropping the mike on the final line of this book (and it's a humdinger) and walking off into the sunset. I suspect other readers, such as those who enjoy the brainy digressions of the series but still read it as an epic fantasy with cool magic and a mystery-laden storyline, would be more horrified at the prospect. Whilst dropping the series at this point would doubtlessly be more artistic, more bloody-minded and more, well, Bakker, it'd also be, from a mundane narrative standpoint, less satisfying.

Rewinding to the start, The Unholy Consult picks up in the tumultuous aftermath of The Great Ordeal, which left many of the major characters of the series apparently dead or missing. The novel wastes no time in resolving most of these questions and getting the story back on track. Other events fall away and the story begins to narrow in on Golgotterath as the Great Ordeal, battered, bloodied and compromised by the horrors it has been forced to adopt to survive, finally arrives in the shadow of the Golden Horns. Other factions soon join them and there are moments of reunion as characters compare notes on their experiences and realise that their prior assumptions about what they face may have been erroneous.

From there the book explodes in a titanic battle sequence as Ordeal and Consult finally clash and we realise, in the grand tradition of Tolkien (whose influence lies deeper on this series than I think is often appreciated), that both forces are not what they once were, that evil has degraded and is lesser than it once was even as good faces the same predicament. The battle is long, arduous and packed with individual moments of epic heroism and foul reversals. Bakker, for all of his philosophical preoccupations, is good at blowing stuff up and sets to blowing stuff up in this battle with wild abandon. But the battle outside the foul Ark is matched by another struggle deeper within it, as intellects and ideologies clash in a struggle of viewpoints which is even more important.

Indeed, seasoned fantasy readers may be struck by the structural similarity between The Unholy Consult and A Memory of Light, the final novel in the Wheel of Time sequence, of the great "last" battle of swords and sorcery being matched by a battle of arguments and semantics that may decide the fate of the world. Bakker is considerably more concise here (in a novel less than half and only a bit more than a third as long as A Memory of Light) and of course roots his arguments in considerably more complex concepts.

The Unholy Consult is a striking novel, remarkable for its conciseness given the magnitude of the ending it depicts (similar to The Thousandfold Thought, the conclusion of The Prince of Nothing trilogy which opened this mega-series, Bakker knows how to drop an effective ending without milking it for a thousand pages) and for the way the author handles his revelations. This series is rooted in mysteries built atop mysteries and it'd be easy for the author to refuse to address them (like Lost), or give a nonsensical, pat answer you suspect they thought of only five minutes earlier (like the latter Battlestar Galactica), but Bakker shows no fear in simply squarely answering questions with answers reached a long time before. He resolves thematic and character arcs begun fourteen years ago in The Darkness That Came Before and if you figured out the answer to a particular mystery in a late-night discussion on the Three-Seas, Westeros.org or Second Apocalypse Forums five years ago, well done. Also, hold tight because here come another three revelations which you really didn't see coming. There are some revelations here that will have the reader nodding in approval, others that will be mystifying and several that are surprising in both their content and their elegance (one, extraordinarily important, answer to a vital series-spanning question would even border on the mundane, but the implications of the revelation are far-reaching).

Other issues go resolutely unaddressed: those hoping for Bakker to drop a Dungeons and Dragons Manual of the Planes-style explanation of how the metaphysics in his universe work should brace themselves for disappointment, although some concepts are further elaborated upon. The author is careful here to reveal some more of the recipe for this story without giving you a full list of the ingredients.

Events build in the novel to a frenzy of battles, arguments and, yes, death swirling down, and Bakker sticks the landing. Epic fantasies have a rather horrible tendency to blow the ending but The Aspect-Emperor gets the payoff it deserves, more The Lord of the Rings and The Crippled God rather than Magician's End or The Born Queen, and epic and impressive it is. You not so much read the finale as survive it, and in the nerve-shredded aftermath have to ask the question which will drive a lot of discussion in the months and years ahead: "Now what?"

The Unholy Consult (****½) is perhaps less elegantly structured as a novel than some of its forebears, with not much in the way of build up before it starts smashing things asunder (from that perspective, this books feels the lack of The Great Ordeal immediately before it far more keenly than vice versa), but it makes up for that with tremendously satisfying character moments, Bakker's best-ever action scenes and, in the final chapter, possibly Bakker's most powerfully effective pieces of prose to date. The novel will be published on 6 July 2017 in the UK and on 11 July in the USA.

Note: The Unholy Consult is a relatively short novel, clocking in at around 450 pages. The rest of the book is made up by an encyclopaedic glossary - an expanded successor to that found in The Thousandfold Thought - a collection of maps and two short stories previously only available on Bakker's website: The False Sun and Four Revelations.
Posted by Adam Whitehead at 20:09

Great review, thank you!!
Can't wait for the 6 of July

Sweet Sejanus, this this just made my anticipation worse. July can't get here soon enough.

Can anyone recommend a detailed spoiler-tastic Story-So-Far summary of the series to this point in plain english? I've only found opaque musings of the philosophy involved, or shallow spoiler free summaries. Any help would be greatly appreciated!

The History of Earwa series outlines the history and backstory of the series so far.