The Seven Kingdoms stand on a knife's edge. In Winterfell House Stark has dramatically regained power, Jon Snow being proclaimed King in the North and Sansa Stark as Lady of Winterfell. In King's Landing Cersei Lannister has usurped the Iron Throne herself by destroying all of her enemies in one fell swoop. But a new player as arrived in Westeros: Daenerys Targaryen has landed on Dragonstone with a vast fleet and army at her command. As the three factions size one another up, Bran Stark arrives in Winterfell with a dire warning of the threat beyond the Wall, a threat that is now more powerful and capable than ever before...and one that is marching south. 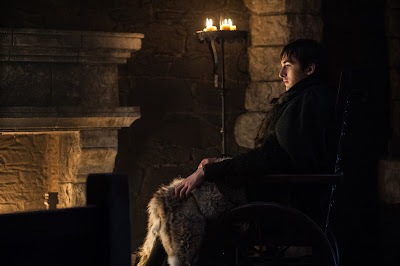 The end draws near. In eighteen months or so Game of Thrones will end forever, concluding the most popular and defining television series of this decade. It's a show that has completely rewritten the rules for the depiction of fantasy on the small screen and also raised the bar in terms of visual effects, epic storytelling and sheer scale. To get from the end of Season 6 to the end of the overall story, producers David Benioff and D.B. Weiss made a curious decision: to give themselves only thirteen episodes to deliver an ending to that narrative, a story that author George R.R. Martin figures will take at least two more thousand-page novels. The result is a truncated seventh season of seven episodes and a six-episode final season to air in late 2018 or early 2019. 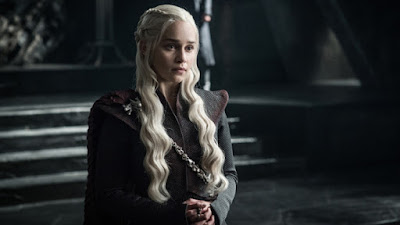 The cynical may suggest that Benioff and Weiss, having exhausted (or ignored) the material in the five published Song of Ice and Fire novels, now simply want to cut to the chase and end the story as quickly as possible so they can move onto other projects. They've had a movie development deal with Fox on standby for years, and have also announced their intention to make a new show with HBO about a parallel universe where the South won - or at least survived - the American Civil War. They've been very vocal in how all-consuming Game of Thrones has been in their lives and how much they're looking forwards to going back to the States, having spent almost a decade based in Northern Ireland working on this show.

It's not necessarily an invalid take. Game of Thrones has always been at its best when it's taken Martin's long novels, identified a key, widely-resonant storyline and then stripped it of tertiary characters and extraneous detail to deliver the same emotional shock to a wider audience in less time, arguably best-executed in the Red Wedding in Season 3. But at its worst, the show has taken a key storyline, tried to the same thing and badly fumbled it, to the point where they should have simply never gone there in the first place (say hello to Dorne in Seasons 5 and 6). 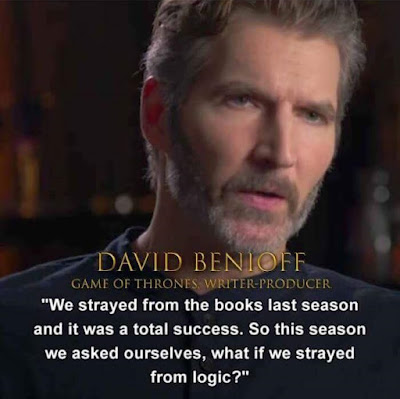 Harsh, but not inaccurate.

Season 7 therefore is the fastest-moving season to date. In terms of raw plot and story development, the seventh season has more going on in its seven episodes than any two previous ten-episode seasons combined. It's a busy, fast-moving season where fleets of ships can half-circumnavigate Westeros (a journey of thousands of miles) in minutes and characters can go from sitting on a rock beyond the Wall surrounded by zombies to having a meeting in King's Landing in a few scenes. This gives the season a sense of relentless purpose: this is Game of Thrones at its fastest-moving and most dynamic, and for a show that has occasionally allowed itself to drown in filler (remember when Theon was tortured for a whole season?), it can be undeniably satisfying.

But it also comes at a cost: it can make the season feel like an edited highlights reel of the Seven Kingdom's Greatest Hits. The devil is in the details and if (by necessity) Game of Thrones has sometimes fumbled the details compared to the novels, it's (mostly) been self-consistent with itself. This season that goes out of the window: continuity (even with just what was established in previous seasons) is now optional and the show's worldbuilding takes a series of tremendous knocks to credibility in the process. Cersei brutally murdering the High Septon and a large chunk of the nobility of the Seven Kingdoms by blowing up the High Sept should be a major event with huge ramifications: there should be riots in the streets, many of her own Lannister and Baratheon vassals should have rebelled and she should have been proclaimed a heretic and a usurper. Instead, she gets away with it because reasons. The Lannister army - inexplicably now the largest in Westeros - then defeats the Tyrell army, despite the latter being established (back in Season 2) as twice the size, because the Tyrells apparently suck at war. Dothraki armies in the tens of thousands can teleport from an island to a hundred miles or more inland with no-one noticing. The enormous Greyjoy fleet is able to sneak in out of Blackwater Bay - despite it being blockaded by Daenerys's forces by sea and air - at will. People in Westeros can fall into massive lakes weighed down in full armour but be rescued with trivial ease. A man is able to run dozens of miles, send a raven to Dragonstone (well over a thousand miles to the south) and have three dragons show up in the space of a couple of nights (at best). Undead armies carry industrial-strength iron chains around with them just on the off-chance they might have to drag dead dragons out from under the ice. 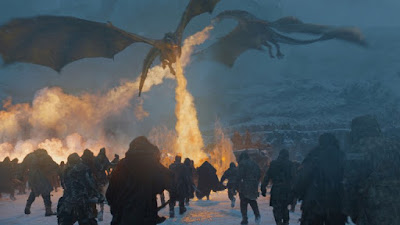 One or two such issues - and the show has had plenty of minor worldbuilding problems in the past - could be ignored or overcome through fanwanking, but at a certain point the show's mounting issues with internal consistency and logic threaten to overwhelm the viewer's sense of disbelief. For Season 7 of Game of Thrones to work, the viewer has to accept that a lot of it simply does not make sense.

If you can accept that (and the mileage on this varies immensely by viewer), there is much to enjoy in this penultimate season. Game of Thrones has always been a good-looking show and this season it looks absolutely stunning. This season has, simply put, the best visual effects of any TV show to date. The dragons (who are front-and-centre in dozens of scenes, including several massive battles) are jaw-dropping, the battle scenes are incredible and the sense of scale that comes from the newfound ability to use drones and CGI to get helicopter-like establishing shots is exceptional. Game of Thrones is starting to exceed the quality of the Lord of the Rings movies for visual splendour, which on a TV budget (albeit the biggest TV budget in history, now exceeding $14.2 million per episode) is no mean feat. The use of CG is also, for the most part, well-judged. The epic battle at the end of the fourth episode raises important questions about the use of weapons of mass destruction against human beings, and the one at the end of the sixth episode ends on a near-heartbreaking note (slightly undone by the aforementioned industrial chain scene a few minutes later, but still). For visual spectacle Game of Thrones absolutely cannot be beaten.

For character work, the show has always boasted the best cast on television and the paring down of that cast over the years means more characters get more screentime. The front-runners, like Peter Dinklage, Emilia Clarke and Kit Harington, are all as reliable as ever, but it's both somewhat surprising and pleasing to see perennial second-stringers like Davos (Liam Cunningham), Jorah Mormont (Iain Glen) and Samwell Tarly (John Bradley) rise to the fore with lots of excellent scenes. The fifth episode, which basically consists of Davos Seaworth arranging meetings, smuggling people in and out of cities and assembling the Westerosi equivalent of the Dirty Dozen, may be the strongest for this reason. Amidst all the fire and fury, the writers also further the storylines of characters like Theon Greyjoy (Alfie Allen) with satisfying emotional resolutions to their arcs. When Game of Thrones hits its A-game, with the epic scale, fantastic actors, engrossing storylines and visual effects working in tandem, the show is simply unbeatable. 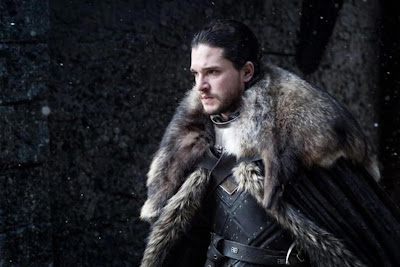 Unfortunately the seventh season is unable to deliver that mix with consistency. Scenes where Lena Headey delivers powerful moments of soul-baring character honesty are mixed in with hammy villain dialogue. Nikolaj Coster-Waldau remains one of the show's strongest performers, but the producers have really not given Jaime Lannister a consistent character direction for three seasons now, and if he finally gets some good scenes at the end of the season it's a bit of a case of too little, too late. Emilia Clarke and Kit Harington have to sell their characters falling for one another, but they don't have enough time or (frankly) enough chemistry to make it work in the time allowed. I was far more invested in the will-they/won't-they romance of Missandei and Grey Worm, or even Brienne and Tormund, than I was in this apparently key character development. And, once again, Aiden Gillen's guttural performance as Littlefinger remains the most inexplicably bizarre and strange on the show.

I've sounded rather down on the season, which is a shame because at its best, the seventh season is visceral, thrilling and laden with punch-the-air, "Hell yeah!" moments, some that book-readers have been waiting for for twenty-one years. But all too often those moments are undercut by the story decisions being made to get there really not gelling together very well.

Game of Thrones's seventh season can therefore be summed up as visually stunning, beautifully acted and absolutely dumber than a box of frogs. But if you can embrace that, it's still one of the most watchable shows on television.

If certain people had their way, half of the characters would still be futzing around in Meereen. The accelerated pacing is fine, no one needs a detailed explanation of where that giant chain came from.

I think the biggest problem with this season was the desire to have Jon and Danys fall in love. It made no sense. Emilia Clarke and Kit Harington tried their best but I just don't buy it and it's not because of of their relationship with each other. If the show had them in a political marriage or something, I can dig it but 2 duty-bound characters suddenly falling in love after just meeting each other? So much that Danys risked her dragons to save Jon? Nope.

I'm not sure I fully understand why seasons 7 and 8 had to be 13 episodes instead of 20. A lot of the problems of this season would have been a lot less problematic if they had spread the same material over 10 episodes.

I liked the season better than you (though Eastwatch is my least favourite episode, so that's different, and I thought Spoils of War and the finale were among the best episodes of the show), but I think this is a fair write up. One minor caveat: this season started way beyond where GRRM is now in the book series, and season 6 probably covers up to the end of book 6, more or less. So, if GRRM sticks to his seven book plan (which I'm doubtful of), seasons 7-8 cover one book, which I'm guessing will have to be just as fast paced and condensed as the show to get through so much.

I was hoping you'd be more ruthless in your review. GoT is now the equivalent of "mindless entertainment". D&D are the best at ending seasons with episodes full of melodrama and spectacle, but character, story, and coherence have now gone completely out the window.

And with only 6 episodes left, and so much left to do, I shudder to imagine how they'll end the series.

Xena with a bigger budget