City of Thieves by David Benioff

"There are cannibals in every building. Welcome to Leningrad."

I was moved to pick up City of Thieves on two counts: first off, David Benioff is one of the writers and producers of HBO's forthcoming adaption of George RR Martin's A Game of Thrones, and I wanted to see how good a writer he was. Secondly, and more importantly, it is a novel set during the Siege of Leningrad, one of the lesser-explored conflicts of World War II but an area I studied several years ago, most notably through Harrison Salisbury's masterpiece of historical investigation, The 900 Days, and I wanted to see if the book could bring that conflict to life. 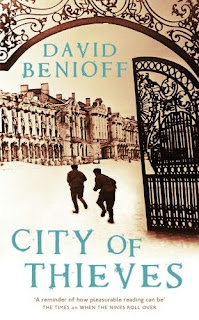 The first week of January, 1942. The city of Leningrad has been under siege by the German Army Group North and the Finnish Army for over four months. The city is blockaded by land and sea, and the only relief route for supplies is a precarious road built into the frozen surface of Lake Ladoga (interestingly, not mentioned in the novel). By night German and Russian artillery batteries exchange salvos and the city's population works furiously in the factories even as they slowly starve. Yet in the eyes of the world the siege is a sideshow to the furious battle raging outside Moscow which will help decide the outcome of the Second World War.

To the people of Leningrad the siege is dangerously real. Hundreds of thousands of the city's populace are already dead, and those who survive find their rations reduced to a few grams of bread per day. For seventeen-year-old Lev and his friends, working as firefighters during the Luftwaffe's nightly visits to the city, finding extra food is a dream. When a German parachutist, killed by the cold, falls outside their apartment block they loot his corpse mercilessly, hoping he has food on him. Unfortunately, they are discovered by the NKVD. Lev is arrested as a looter and spends the night in a cell with a charismatic deserter, Kolya. Come the morning, they both prepare for the firing squad but are instead given an impossible mission by an unusually gracious NKVD colonel: to find a dozen eggs for his daughter's wedding cake and be forgiven for their crimes.

So a desperate search begins, as the young, shy, chess-playing Lev and the carefree, flamboyant and almost suicidally brave Kolya fight off the cold and hunger as their mad quest takes them from the besieged city to the countryside beyond where partisans and German counter-insurgency troops fight a bitter guerrilla war. 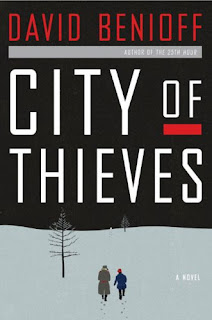 City of Thieves is at heart a mismatched buddy story, but one told with wit and charm. The two protagonists (one of whom sadly isn't David Benioff's grandfather, despite what the introduction indicates) are superbly drawn, especially the irrepressible Kolya whose artistic ambitions and insatiable appreciation of female charms combine to make a tremendously amusing character. The hardships and deprivations the people of the city are living under is mostly accurately described, although the general feeling from The 900 Days was that by this point the people of the city were so weak that gallivanting off on 30-kilometre walks into the countryside and taking part in combat with German stormtroopers would probably be beyond the physical capabilities of most inhabitants. Still, even taking this into account Benioff does a good job of portraying the hardships faced by the city, although notably he doesn't dwell on some of the more grisly details (the corpses left on the streets or ill-advisedly dumped in the river because no-one had the energy to bury them).

The story is straightforward, but well-told, and the ending is as close to happy as it can realistically be, with a nasty but predictable twist hidden behind a more unexpected and gut-wrenching one.

City of Thieves (****½) is a splendid, gripping read with a dark sense of gallows humour and some vivid but occasionally disturbing imagery. Well-recommended. It is available in the USA from Viking and in the UK from Sceptre.
Posted by Adam Whitehead at 21:19

Have you read Cory Doctorow's short story "After The Siege"? (Online here.) It's inspired by the stories his grandmother told him about living through the Siege of Leningrad.

Not sure if the link worked correctly. It was supposed to be this:

I was surprised by how much I liked this book--one of my favorites of the year!