GAME OF THRONES triumphs at the Scream Awards 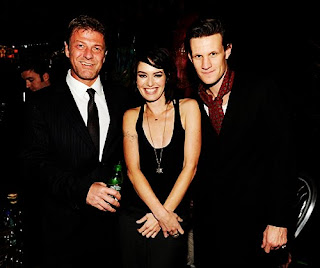 Ned Stark and Cersei Lannister meet the Eleventh Doctor. This is like the craziest - but also AWESOMEST - fanfic cross-show mash-up you can think of.
The show won three awards, with Peter Dinklage picking up Best Supporting Actor for his performance as Tyrion Lannister. Emilia Clarke then picked up Breakthrough Female Performance for her role as Daenerys Targaryen. Finally, Game of Thrones itself won in the Best Television Show category, beating The Walking Dead, True Blood and Doctor Who (though, as the above image attests, Matt Smith didn't hold any grudges).

Well done to the cast and crew of Game of Thrones for their victory!
Posted by Adam Whitehead at 17:40

Email ThisBlogThis!Share to TwitterShare to FacebookShare to Pinterest
Labels: a game of thrones (TV series), a song of ice and fire, doctor who, george r.r. martin, hbo, news, sean bean