Transformers: Revenge of the Fallen

According to common wisdom, the plot of Transformers: Revenge of the Fallen is incomprehensible. Which is odd, as it actually seemed reasonably straightforward to me. Essentially it goes like this:

Thousands of years ago - and apparently without anyone noticing - the Decepticons placed a device inside the Great Pyramid of Giza that can blow up the Sun and harvest it for energon, which they can use to fuel themselves and possibly restore their dying homeworld of Cybertron. The Fallen - the Decepticons' supreme commander, senior even to Megatron - wants to activate the device, but he fears setting foot on Earth due to the threat posed by Optimus Prime (apparently only 'a Prime' can kill him). Also, the device's starting key, the 'Matrix of Leadership', has been missing for millennia. The Autobots and their human allies end up getting involved in the Decepticon plan to find the key and start the machine and the whole matter is resolved in a string of unlikely plot coincidences and stupendous explosions (spoiler: the good guys win). 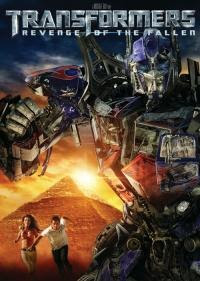 What confuses the matter is Michael Bay's total inability to selectively self-edit. The problem with Revenge of the Fallen - aside from those inherent to the franchise established in the opening movie which it is far too late to do anything about - isn't that the ingredients are wrong or that you couldn't make an entertaining movie with them, but that Bay and the writers throw every single half-baked idea they have into the mix, regardless of whether it makes sense or if they have the screentime to do it justice. In isolation, ideas like Devastator (a massive robot made up of seven lesser ones), the Pretender (a Terminator-esque Decepticon assassin that can pass as human) or Jetfire (an elderly Decepticon who switched sides to join the Autobots, got bored with the war and has spent decades disguised as an exhibit in the Smithsonian) could have made for interesting scenes or story points. Thrown on top of one another, they decohere the story and make it increasingly hard work to follow what's going on amidst the ridiculous number of fireballs being hurled around.

Matters aren't helped by the human cast: Shia LeBouf was blandly inoffensive in the first movie, but doesn't have the acting chops to sell Sam Witwicky's plot-inspired descent into temporary insanity, which reduces the middle third of the movie into barely-bearable tedium, though things are briefly livened up by the arrival of the Pretender assassin, a cool idea which is underdeveloped. In fact, most of the human performances are uninspired and uninteresting. There's also a bizarre lack of emotional response to events in the film. At one point a US aircraft carrier is destroyed and sinks, taking with it thousands of lives and an appreciable fraction of the USA's military power, but this garners almost no response whatsoever from anyone. No-one seems to be particularly concerned about the partial destruction of the Great Pyramid of Giza, either.

The Transformers themselves also suffer from the problems of plot overload. Compared to the dozen or so in the first movie, there are about forty in the second, and very few have any development or interesting character traits. Those that do get more screentime tend to be lazily-written and based on human racial stereotypes and caricatures which are inappropriate and moronic. Still, from the carnage Jetfire emerges as a more interesting character that not enough is done with, whilst Optimus Prime and Bumblebee develop well over their roles in the first movie. Indeed, Peter Cullen's dignified voice performance does seem to have come in from a completely different and considerably better film altogether. The Decepticons are mostly lacking in any kind of development whatsoever with the Fallen being a colossal disappointment and Devastator being a let-down after an impressive first appearance. The film's lack of memorable villains is a key problem (though hardly the greatest in the picture).

What really damages the film beyond all possible repair, however, is its severe pacing problem. The climactic battle sequence in the Egyptian desert (written by someone who's never looked at a map of the Middle East, but let's not go there) goes on for far too long, eating away at screentime that could have been better-used earlier in the movie to flesh out more interesting concepts and ideas, or simply could have been removed: two and a half hours is probably way too long for a brainless popcorn action movie in the first place.

Transformers: Revenge of the Fallen (*) is a spectacular failure of a movie, being incoherent, badly-paced, badly-acted and ill-conceived. The special effects are genuinely impressive and there are glimpses of concepts that could have made for a great film, but these are left underdeveloped in favour of atrocious attempts at comedy or pathos. It's certainly not the worst movie of all time, as some have labelled it, and it's almost worth watching as a masterclass in how not to make a big-budget action film. A tremendous let-down considering some promising ideas and also the inoffensively entertaining first movie in the franchise.
Posted by Adam Whitehead at 13:19

Email ThisBlogThis!Share to TwitterShare to FacebookShare to Pinterest
Labels: film reviews, revenge of the fallen, transformers

I just watched the 3rd movie this weekend, and I'd love to hear your thoughts on it.
You mentioned that the film maker has never seen a map of the Middle East and I suggest that they just don't care and don't believe the audience is intelligent enough to notice these things. For example: part 3 was mostly filmed in Chicago, but largely takes place in DC. In one scene there's a fight on the highway outside of DC and a sign for an exit to Aurora is destroyed. Aurora is a suburb of Chicago. That sort of a thing would be easily corrected in editing, but the film makers just can't be bothered.

The good guys win? Damn it - now there's no point in watching the film. On the other hand, I just got two and a half hours of my life back. Thanks Adam. - Ian

There is something wrong with me, because when this movie is on, I can't help but watch it. Maybe it's like visual crack or something.

You are so right. And the racial stuff... Well after killing Jazz in the first movie for no reason, Mudflap and Skids (see what he did there?) are quite simply the most offensive caricatures I've come across since mmm.... Yes jar jar Binks...
Hollywood is making me paranoid about its views on black people man....
I won't even get started on the 3rd film, but I had to watch it, and you should to; I'd love to read a review with you ripping that one apart too... ;-)