Erevis Cale and his allies have survived a confrontation with the slaadi servants of the enigmatic Sojourner, but now find themselves lost on the Plane of Shadow with no way home. Meanwhile, Azriim and his fellows seek to execute the next part of the Sojourner's plans and head for Skullport, one of the darkest and most dangerous cities in the Realms. 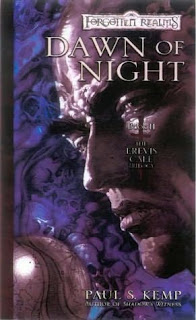 The second volume of the Erevis Cale trilogy picks up immediately after the first book and once again pits Cale and his band of willing and not-so-willing 'heroes' against Azriim and his fellow slaadi. The first novel, Twilight Falling, was entertaining but also suffered from clunky writing and some bad pacing. Dawn of Night is a notable improvement, with a more notable focus on the battle of wills between Cale and his sometimes-ally Riven to prove themselves the better man. The prose is more polished (though still prone to odd lapses) and there's also a satisfying amount of weirdness invoked when Cale and his friends find themselves lost on the Plane of Shadow. Skullport - one of the most vividly memorable locations in the Forgotten Realms setting - is also brought to life in all its squalid, grubby splendour.

As well as the Cale/Riven rivalry, the book also brings into play several other interesting devices. The duality of having two 'adventuring bands' diametrically opposed to one another is an interesting touch, and Kemp imbues each character with their own quirks and motivations that fleshes them out nicely. It's not the deep-seated characterisation of modern masters of fantasy, but it's enough to make the book more interesting than the average tie-in novel. Kemp also takes an interesting approach to magic, which is so codified by rules and structures (since it is based on the D&D magic system) that it's use has become routine and even perfunctory. This depiction may be slightly dull - the wonder of someone unleashing a powerful magical spell in another book is here totally missing - but it also makes sense in a world where the use of magic has become routine over the course of thousands of years.

On the minus side, the book suffers somewhat from middle book syndrome (there is no beginning or end, which is to be expected) and there are moments when the setting's game origins are again laid bare, such as being able to tell when the characters have succeeded at making a saving roll against a spell. These are much less frequent than the first novel but still a little wince-inducing when they happen.

Overall, Dawn of Night (***½) represents a notable improvement over the first book in the series. It's still, at heart, an adventurous romp with an unusually conflicted band of heroes as its sole major twist (which is less of a twist now than when the book originally came out), but remains an entertaining read. The novel is available now in the UK and USA and as part of the Erevis Cale Omnibus (UK, USA).
Posted by Adam Whitehead at 19:22